This is a commissioned painting of Behbinn.   "CH Malleyrhu First Love JR" 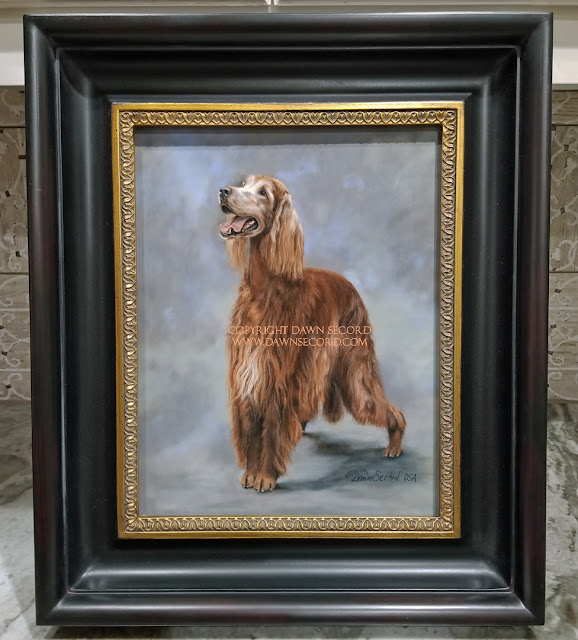 She is gone now, but she lives on in the heart of her owner and through her puppies that enrich our lives.

There is a long story behind Behbinn and me, and I will attempt to keep this short....

In 2009, my husband and I were attending the Irish Setter Club of America National Specialty which was held in that year.  Our young male dog, Drew, had placed 4th in the 12 - 18 month class.   A friend and art collector, Claire Andrews, had approached me to compliment me on Drew.    Anyone who knows Claire, knows a compliment from Claire is a big deal.   Claire then went on to recommend Drew as a potential stud dog to another friend, Jan Mathews, who had a lovely young girl named Behbinn.   Jan and I talked about a possible breeding.  Our dogs were too young at the time.  There was a lot to be accomplished before truly considering to breed these two dogs.   We wanted them to complete their championships, they needed them to undergo health testing and receive various health clearances, time would tell - but we decided to talk down the road.

Two years later, our two dogs were of age, they were champions, and had their health clearances.   I took photos of Behbinn, and her pedigree, to Pat Haigler, my mentor, and sought her advice on the potential breeding.   Pat and I sat down and discussed all the dogs in the two pedigrees.   It was decided - we would move forward with the breeding.

Drew and I were in Southern California at the time, Jan and Behbinn were in .   Previously, my husband and I had two breedings with Drew to our Monet, both didn't take due to timing issues with Monet.   We didn't want to risk a timing issue with Behbinn.    Getting the frozen semen to Behbinn was challenging on a timing basis.   Thankfully, we were successful and a lovely litter of pups rewarded us.    Jan kept "yellow boy"  aka "Brady" from the litter.    Here is a photo of me and Brady a few years ago.   He is a lovely dog.   Rich and I lost Drew a few months ago.    Through Brady, we have a little piece of Behbinn and Drew to warm our hearts.    Much thanks to Jan (and Claire) for seeing the beauty Drew had to contribute to the lovely Behbinn.  Thank you to the owners of their pups for the fantastic homes they have given them.