Rembrandt Blue and the red dogs in the studio.

This is a painting of a dog that I've know his entire life.    He lived a full life, but not matter how long our pets live, it just is never long enough. 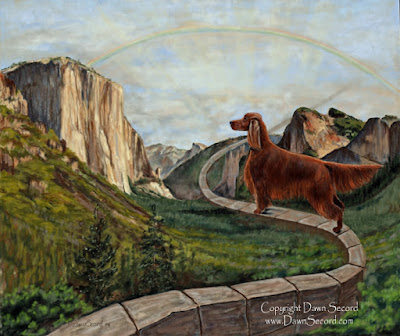 Before he passed, his owner had planned this painting.  I had a file of photos of him.   I never expected I'd be painting him when I did.   I've asked his owner to share about the Pilgrim, Yosemite and the painting.   Here are her words...

About 30 years ago, I made my first trip to Yosemite National Park.  I was so taken by the beauties of nature, that I thought I was in Heaven.  The rock formations, the waterfalls, the wildlife and the vegetation, all made a beauty that made me want to spend my life in eternity in Yosemite.
Pilgrim came into my life just over 10 years ago.  He was my BEST friend for nearly 10 years.  He was beautiful, but more than that, he was the true meaning of love.  He made me laugh and smile on a daily basis.  He laid by my side day and night.  He greeted me with smiles when I went away and had to leave him home.  He cried a sound that said "I'm so glad you're home!"  When he gave me kisses, I told him "I love you" and he emitted a sound that said "I love you, too!"  Only someone that loves a dog as I did Pilgrim would believe and understand that.

When Pilgrim was about 9 years old, I began to think about a portrait I wanted painted of Pilgrim at Rainbow Bridge.  I searched for a bridge where I might be able to take a photo of him.  I could not find anything appropriate. I always knew that when I lost him, I would have him cremated and have his ashes taken with mine to Yosemite.  He died without warning.  I told my artist friend, Dawn Secord, that I'd like to have the portrait at the Bridge include Yosemite.  I sent her many photos of Pilgrim and the awesome pictures I had taken at the park. She chose a photo I had taken at Tunnel View, where the view is breath taking.  El Capitan, Half Dome, Bridal Veil Falls and the Valley fill the scene with so much more. She painted it with such precision and added the block walkway for Pilgrim to cross over into Heaven with a rainbow and sun filtering through the clouds.  It is TRULY an AWESOME portrait.  Tears fill my eyes when I look at it.  It depicts the feeling I have for the place that will welcome me and those I love.  No words can describe the beauty I see and feel when I look at this painting.

Thank you, SO MUCH, Dawn Secord, for capturing my feelings for a place and a friend that I love most! 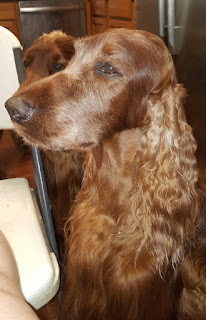 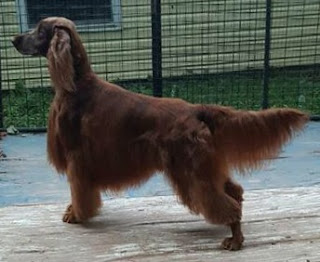 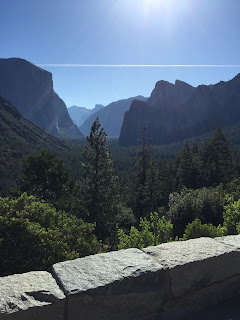 Posted by Dawn Secord at 2:46 PM No comments: