This is a painting of Easi.   Her owners tragically lost her a few weeks ago.   The painting was being finished at that time.    When they received the painting today - and opened it - I think it was like getting a little piece of her back.   That is how I feel when I look at the paintings I've done of my pets that are passed.   Having their painting allows me to feel I have a piece of them here in my home - something special in which to pay tribute to them.

Her owners gave me permission to use the information they had about her on their website - here is what is posted under a beautiful photo of her:

"Easi, and that totally depicts her, is our Homebred Star. Finishing her AKC, and Canadian Champion title just months before she won the Irish Setter Club of America National Specialty in 2008 , then only to follow the next year by winning Best of Breed at Westminster "The Garden" in New York City. All of this before she was 4 years old. Throughout her career extending  2 years, always piloted by Jennifer Holmberg Baggenstos, Easi garnered 50 + Group Firsts, Numerous Best In Specialty Breed Awards and Five All Breed Best In Shows." 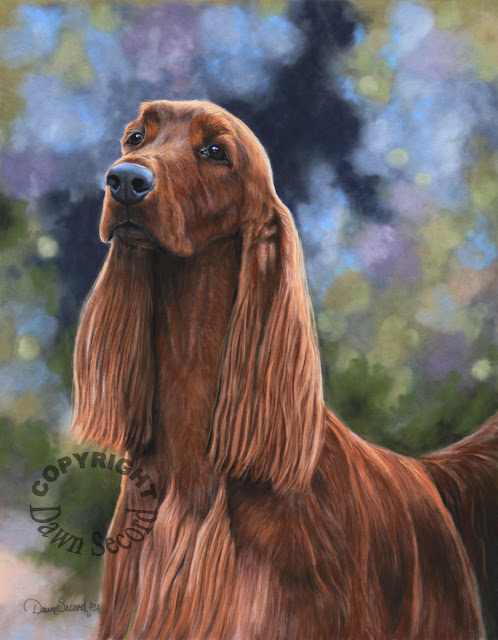 In 2008 I was at the Irish Setter National Specialty where Easi had gone Best of Breed.  It was an exciting show - and personally an emotionally exhausting show.  It was there I'd retired my special girl Jewel.  She was in the show and made it to the final round as a veteran.   I remember walking towards the ring after the show (like usual, I'd left my brush or something at the ring and I was on my way to retrieve it).   My path was on a course to intersect with Janet who was walking my way.   When I was about to pass her I saw she was crying - her face was flushed.   Stopping and filled with compassion towards this woman who was having something very emotional going on I asked her, "Are you okay?"   She wiped her tears and with a huge smile told me she was okay, that it was her girl that won.   I congratulated on her.  I'd been in the ring with Easi.  She was breathtaking.

Now, years later, I was honored by being asked to paint her.   You know they always say good things come around.    This has been a full circle for me.  Being able to share in the glory of this dog and then being able to paint her.    Thank you Janet for having me paint your special girl as a surprise for Gary.
Posted by Dawn Secord at 9:45 PM No comments:

This is a painting of Jade - an Australian Cattledog

This painting of Jade was recently finished.   Her family saw my art a few years a go and spoke to me about painting her.  They put down a deposit and a place on my waiting list.

We made arrangements for the painting and then life got in the way.   They would contact me, then I would contact them.    They sent me a number of photos of her a few months ago.    I finally was able to "see" Jade.  Until the photos arrived, I simply knew I was painting an Australian Cattle Dog named Jade. 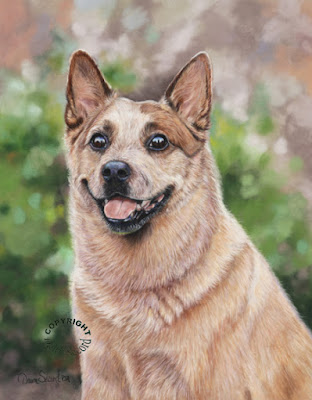 When I saw her photos my heart jumped.  She was not only lovely, but you could see in her eyes that she loved her family.   There was "that look" that I could see in the photos - the look that she was lovingly looking into the eyes of the person taking the photo.  It was time to get to work.  It was their time on the waiting list and I had a beautiful girl to paint.

Thank you to her family for having me paint your special girl, Jade.

Posted by Dawn Secord at 9:24 PM No comments:

My work is in a show this April.  The theme of the show is California Images.

This is an oil - subject is an egret.   There is an under painting solely of burnt sienna.  Most of the background will be completed with a palette knife. 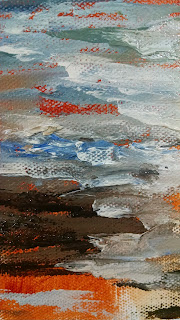