It was going to be a very hot day at the specialty and we weren't going to show Monet though she was entered.  Rich and I picked up the arm bands for Bling and Faith leaving Monet's until later.   We thought it would be too hot for her.

We decided to show her.  We'd brought a box fan and had it on her in our set up.  She was handling the heat much better than me - ha ha! 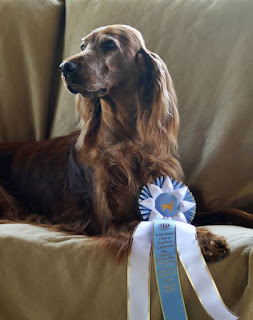 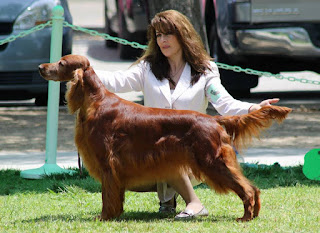 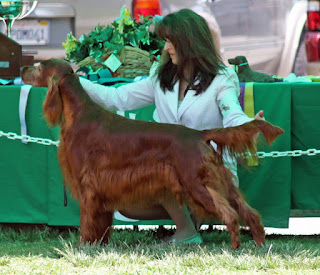 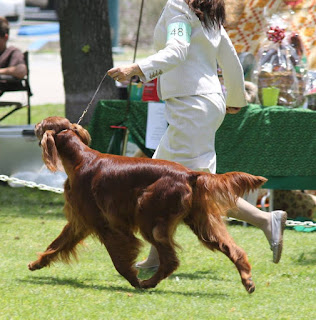 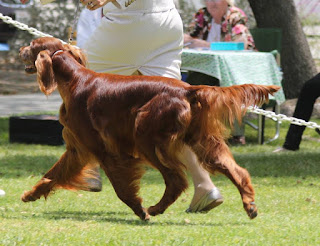 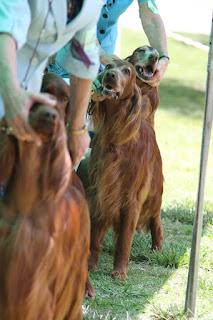 To our surprise, she went Select with some outstanding competition that was in the ring.   There were 12 specials plus the veteran dog and bitch.   To say we were thrilled would be an understatement.   What really did surprise us was her attitude.   Maybe I should show her more often than a few times a year.   She really did have a blast.   Thank you to judge Mrs. Lowell (Arlene) Davis for this lovely placement.

Today she is being really feisty.  I thinks she is proud of herself....and proud that she did better than her daughter, Bling.  Yeah Monet!!
Posted by Dawn Secord at 7:28 PM No comments:

Here is a video of Bling at the dog show.  She is so much fun to show!! 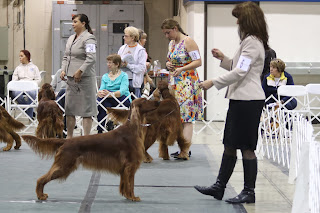 Click on this link to see the video:
Bling stacks at the dog show

So proud of young Bling.  She went WB, BOW and BOS at the Mission Circuit, Antelope Valley Kennel Club under judge Ms. Elizabeth Muthard on 5/25/15.   She needs one more major for her championship.   Thus far, all her points have been from the Bred By class.

No rush.  Girls just wanna have fun - and we are sure doing that! 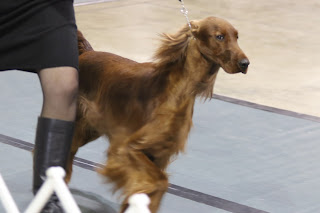 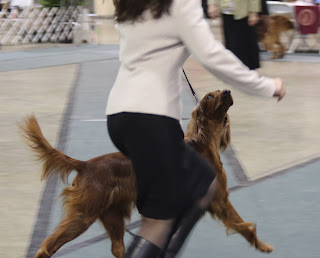 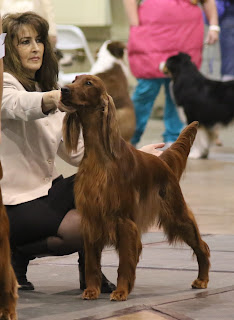 Here is a video of our hatching chicks.

There is a fun story behind the chicks.   Not sure when I started wanting a chicken - seems like forever.   Why - gosh - who knows.   They are a lot more work than ever expected, but I sure enjoy them.

My first chicken was named Belle.   She was a black beauty sex link and I got her as a tiny chick back in probably 1991.   At that time I did murals with my artwork.  For fun, I hid Belle Chicken in all my murals - regardless if they were for a children's room or a commerical account.   I can remember when I painted a mural at our veterinarians' clinic.   The mural was to feature dogs and cats of course.  Then, hiding behind a fence was...Belle Chicken.   My veterinarian's wife was looking over the mural when it was finished.  She started laughing and said, "IS THAT A CHICKEN IN THERE!??"  Yes, it was!

So, back to our chicks.... here is their story!

Our chicks are hatching... we had no clue if the eggs had been fertilized. There is a wild bantam hen and a standard rooster that hang out by our barn. The little Bantam hen has been around for years.  She really doesn't officially belong to anyone.  Some years back she flew into our pool escaping a raccoon.   She is a cute little thing but quite wild.   So, she had made a nest and the dogs found it in the horse arena 21 days ago. She had just laid eggs in it that day.  I know that for sure as the dogs would have told me about it previously.

We removed the eggs and the took them along with the bantam hen into our chicken coop with our three Silkies. She was not safe from predictors where her nest was.  It was also next to a drain pipe and a serious rain storm was headed our way and expected to hit that night.

The Bantam literally flew the coop ha ha. I mean she officially flew out of there. Guess that's were the saying comes from. so the Silkies ( Daisy and Lilac ) have been sitting on the eggs. The two of them together have been partners in the nest box...and to our surprise the eggs had been fertilized and they are now hatching.

Everything we'd read indicated that the standard roos (rosters) would not be able to fertilize the bantam hen due to their size difference. Guess everything I read was wrong or the hen has been around the neighborhood and has other boyfriends.....though the chick that has hatched is yellow and there are no other white roosters in the neighborhood so, I think white boy is a daddy.  He is a big jolly fellow and I've painted him a number of times.   He follows me around and is really quite gentle.   For treats, I give him kernels of corn and he takes them one by one from my fingers as if he were taking them from a baby.  So, I'm pretty fond of him.   Sure hope all the chicks that hatch are girls....so don't need another boy around here!

Will post more videos and pictures as we get them!
Posted by Dawn Secord at 7:04 PM No comments: 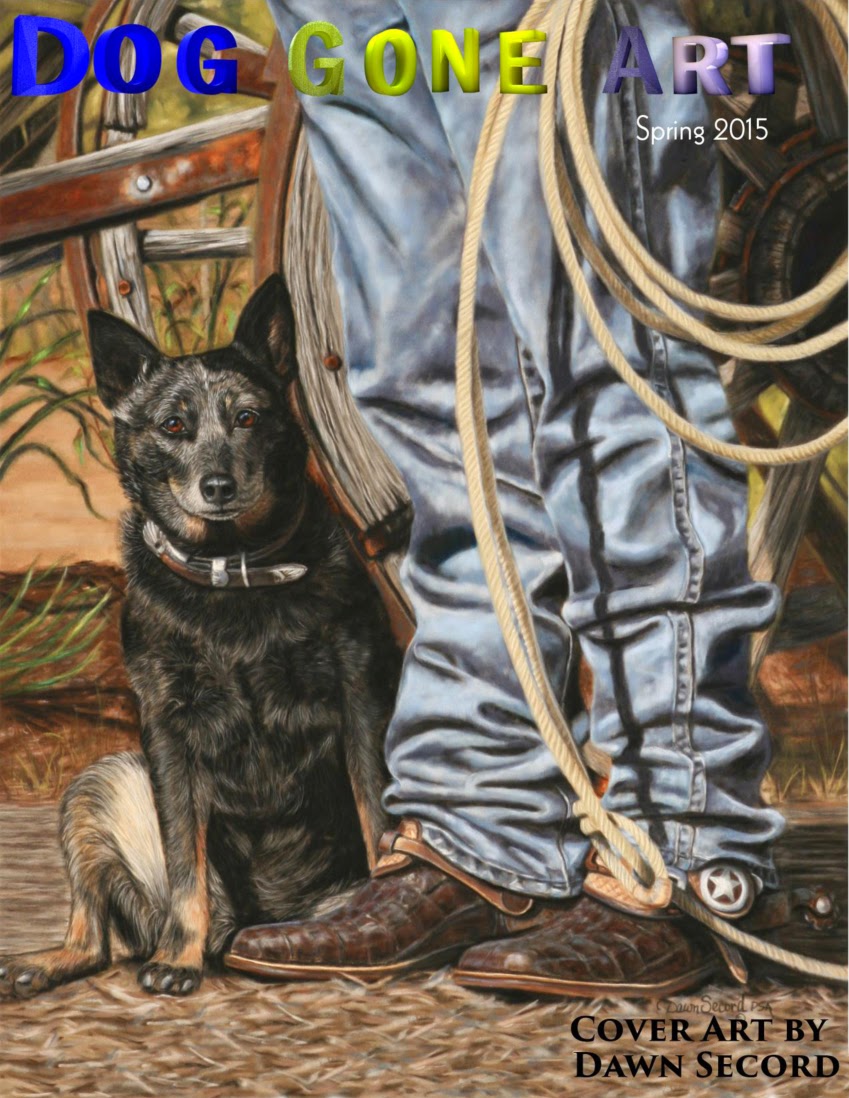 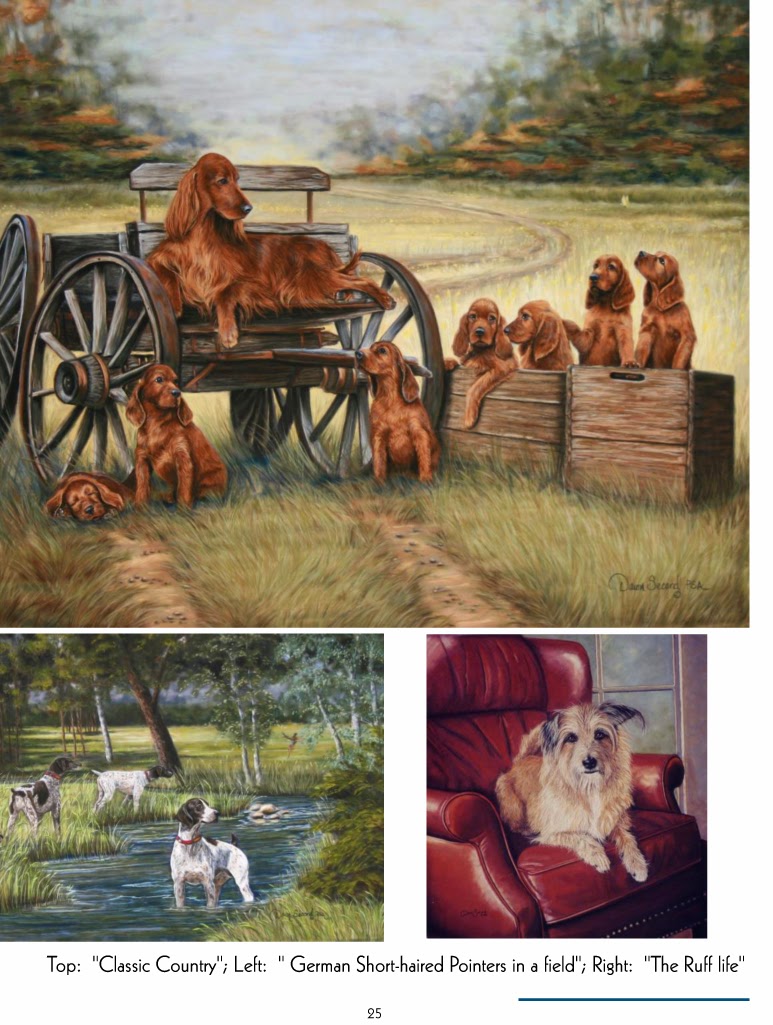 I am the featured artist in this issue of Dog Gone Art.   My work and story are on pages 5 - 26.  I was pleasantly surprised at how many pieces of my work are in the article.  Thank you to the publisher for selecting my work.

To view the article from the above link (if having trouble) once you have clicked on "read more" under the cover of the latest issue (my painting of an Australian Cattle Dog standing next to her owner) scroll down and click on "down load" to down load the PDF file.

Hope you enjoy the article!
Posted by Dawn Secord at 9:48 AM No comments: