This is Dottie.  I met her owners last year and we discussed the possibility of me painting Dottie's portrait.   As the conversation progressed, the idea of having two photos of Dottie in her portrait, a head study and a racing shot, became the goal.

Dottie's parents had some amazing reference material for photos.  But, I'd never seen an IG race so I met up with them and was able to watch their dogs run in person.   I took more reference photos and had a blast.   Those little guys ran like rockets!!!  I'd taken one of my Irish Setters with me, Bling, and someone asked me if she was racing.  We all had a good laugh over that one.

For the painting, they chose to have me paint a head shot of Dottie when she was younger.   She had a beautiful collar on but it obscured my view of her markings.  So, they took a photo of her in without the collar.   Great help!!  On Dottie's neck, the colors were subdued to ensure the viewer would be drawn to Dottie's face and to also make it more of a subtle area on which the racing part of the painting would be layered.

Hope you enjoy the painting of Dottie as much as I did painting it!! 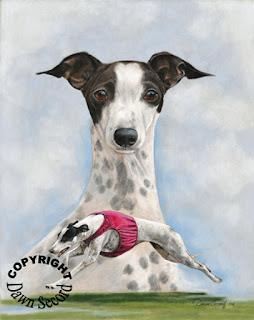 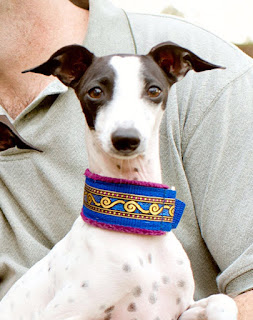 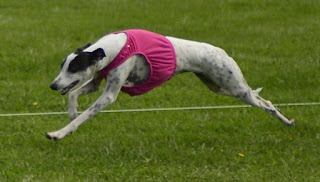 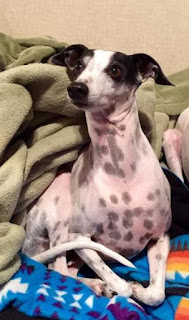 Posted by Dawn Secord at 8:48 PM No comments:

This is a mini pastel painting 4 x 4. 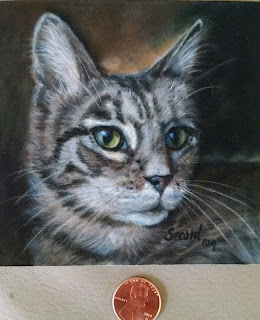 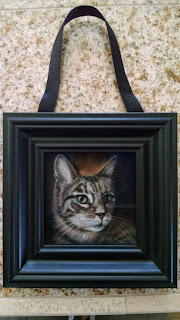 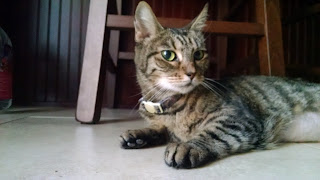 It is the perfect size for a gift.

I do a lot of gift certificates for paintings these sizes.   Email me or call me for more information.
FFF@Linkline.com
DawnSecordArt@Gmail.com
(909) 393-7111


Happy July everyone!
Posted by Dawn Secord at 10:03 AM No comments: