Several years ago I painted two lovely young but mature Irish Setters. I'd photographed them in Wisconsin while traveling. When I gave the painting to the dog's owner, she was as excited as I was with the painting. Some years have passed and that lovely young female has grown into an amazing adult and had her first litter of pups. To my delight the owner had me paint the tiny pup she kept from this litter. I'm not sure I can express the joy in my heart to have painted the pup after painting its dam. I've asked the human mom to share the story of this special pup. Here is what she shared:
As you may know, this was my first litter ever, born during an ice storm when we were without power. Skipper was the name of my childhood dog, a boxer my parents got as a puppy about the same time I was born, so we grew up together. I had never even thought about naming another dog after him. Because this litter was immediately dubbed the Squeakers , my daughters were amusing themselves during the very long day (Callie took a 5 hour whelping pause after the third puppy!) giving all the puppies baby names that started with "Squ" but when purple girl girl was born, for some reason, Jen looked at her and said Skipper. Even though she was the seventh puppy to be born out of 10, I just had the most visceral reaction to her. I swear she crawled over to me as soon as we put her down after drying her off. For 8 weeks I had to force myself not to bond with her in case she wasn't the pick bitch!
Anyway, my other daughter Jessica took this picture of her the first day her eyes were fully opened. She was just starting to figure out how to focus them. She was the first to escape the whelping box and still believes the top of the pool table in the family room is her private perch. Her registered name is Carillon By Candlelight because we had no power the day she was born.
I love the painting! Not only because it is my sweet Skipper but also because it is a wonderful way to remember the joy of my first litter. Thank you so much.
Thank you Carolyn for having me paint your dogs. 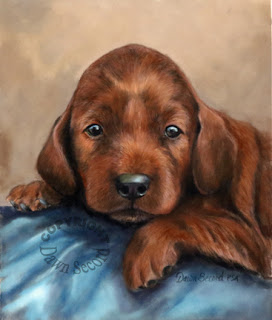 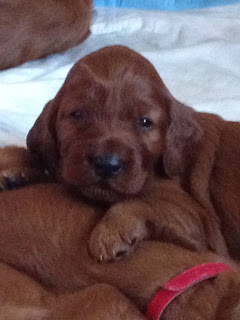 When Marsha first approached me to paint Reilly I was excited.  Her love of this dog flowed through her every word.   After several discussions, Marsha decided for the painting to reflect her life with Reilly.  The painting would show Reilly as a pup, as a 5 year old dog and lastly as he is today - 13 years old. 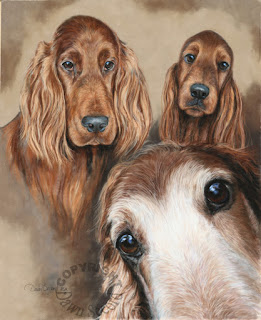 Marsha began sending me photos of Reilly which were compiled in a folder as I do with each commission.   She had some really wonderful photos.   Many of our conversations were on line via email and one day I decided to go to her Facebook page.  While enjoying her photos of Reilly I came across one Marsha had taken of her new puppy, Bentley.  In the front of this photo was Reilly - and I began laughing out loud - Reilly had actually photo bombed the photo of Bentley.

There is something special when you are moved by a photo like I was of the Reilly photo bombing.   My wheels started spinning and I thought, heck, why not use the photo bomb photo in the painting! So, I assembled a collage of photos for Marsha to consider for the painting I was creating to celebrate the life of Reilly.   She LOVED the photo bomb idea - much to my delight.

I asked Marsha if she would like to share a little bit about Reilly with me and this is what she told me:
Reilly is the gentlest, happiest setter soul I every had or have known - from the time he was a pup through today as a senior dog.   He drew a lot of attention because of these traits and made a lot of friends where we lived in LA and Atlanta.  Everyone, and I mean everyone, knew him.   He just has a way to rein you in.  I think it is his gentle soul which is reflected in his eyes.   Some of the neighbors refer to him as the neighborhood ambassador - people I don't know!

Having lost a dog myself that lived to almost 13 in the past few years, this painting of Reilly really touched my heart.   How is it that one day they are this precious bubbly bundle of puppy joy and the next day this white face looks loving you in your eyes.  Time is truly but a vapor.  Enjoy every day with your dogs as the days fly by far too quickly. 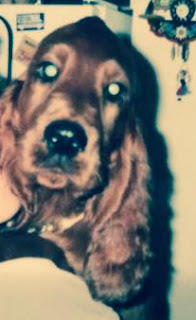 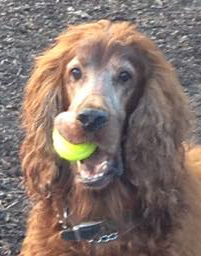 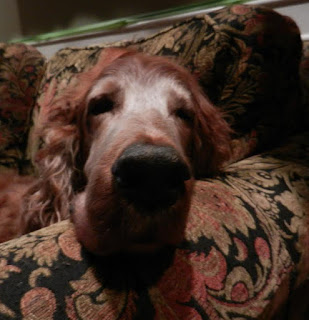 This is Vinnie.   His owner lost him when he was 6 years old.   It is always so emotional for me to paint a dog that passed at a young age.  Having lost a young dog, I so understand the dreams and memories that will never come to be because time has cruelly been taken from you. 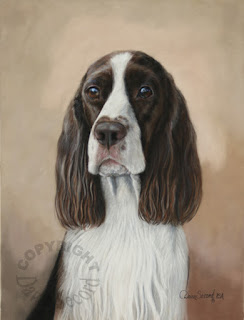 I asked her to share Vinnie's story and this is what she told me.

It's so difficult to loose a dog. They are our pets but they are more than that - they indeed are a piece of our hearts! Vinnie was one very special guy - he was my shadow, my constant companion; he truly felt he was there for me and to make me smile (and at times laugh hysterically!) and I lost him way too soon! As I have been trying to understand why my grief has been so deep, I realized he was the most emotionally aware dog I had ever met or even heard of!! He wanted to please me and make me happy at all times - I could never cry - he would climb up me and be such a joker kissing me and such that every single time, he would turn my tears around!

We did SO much together - not just dog shows and earning titles in so many venues, but Vinnie was a very talented therapy dog! An example of his deep awareness was reviled to me one day during one of our therapy dog visits. We visited with children and he loved his kids!! A mother approached us with her 2 daughters - the older one instantly got down on her knees to pet and play with Vinnie - the younger was afraid, and hid behind her mom. We could coax her out and Vinnie as usual, would present his head to say "Hi". She would shriek and jump behind mom. After a couple of times, with us assuring her he wouldn't hurt her - Vinnie fell board flat on the floor on his side!! Both mom & the girls were all asking what happened? What's wrong with him? And I truthfully did not know! He then lifted his eye to mine and as our eyes met, I knew! When I recovered, my response to them was that nothing at all was wrong with Vinnie - he laid down flat on his side so she would know he had no intention of harming her and that he wanted her to come and pet him. And she did - and mom shared with me she had such a fear of dogs he was the first dog she had ever petted!

I miss him dearly - but am thrilled to be able to have his most incredible portrait to keep forever.

Thank you for having me paint Vinnie for you Veronica.   He was so special. 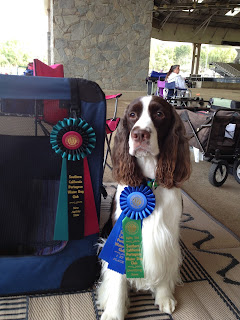 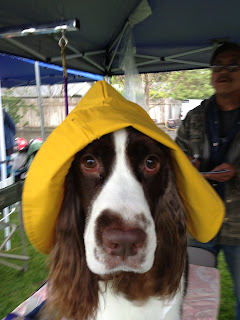 Posted by Dawn Secord at 9:53 PM No comments: