Oil painting of a cat in process 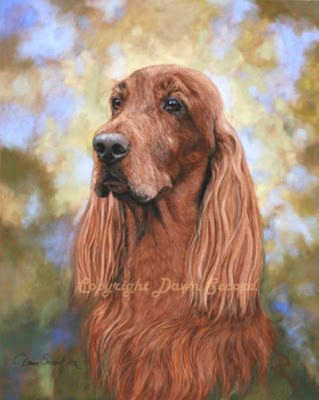 Ruby is a remarkable girl. I met her an ISCA National Specialty. Ruby's owner approached me to commission a painting of this beautiful dog as a surprise gift for her parents.

There were a few changes that were needed to be made to the photos that were taken of Ruby. The wind was blowing her hair which I chose to lay down softly. The sun had been in her eyes and she was squinting in the photos. It was necessary to open up her eyes a bit. I had taken some photos in the shade and had reference material of her eyes not squinting. We can never have too many photos. It is amazing how one photo that seemingly is unimportant ultimately provides me with needed reference material! Lastly, in the photos, Ruby was ten years old and due to being spayed her coat had lightened. In the painting, her coat was darkened to a richer mahogany.

Ruby's owners were very pleased with the final painting. When the gift was presented, the recipients called me right away to thank me for the painting. It was a wonderful call and so enjoyable to hear fun stories about Ruby. She is truly a special dog.
Posted by Dawn Secord at 12:29 PM No comments: 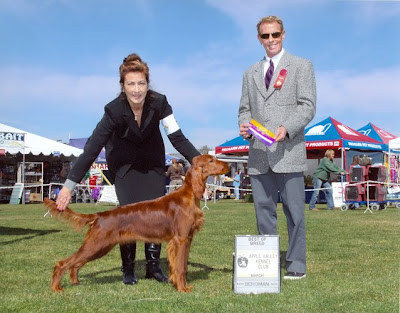 Faith is six months old in this photo - almost 7 months. It was her second day out as a show pup. She went WB, BOW and Best of Breed. She is quite a handful at times and I was very proud of her for keeping "four on the floor"!
Posted by Dawn Secord at 11:19 PM No comments:

Drew helps with the painting 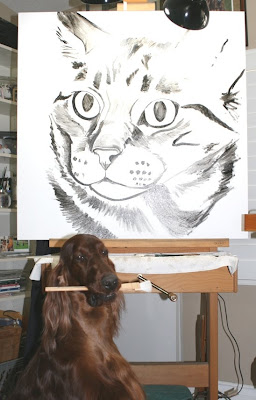 I am doing this cat painting a little bit differently than usual. It is a pretty dark cat and there will be several layers of under painting.
The first layer is identifying the original sketch of the cat. This is an outline painting in black with some dark greys in the bigger mass areas. Then, I'll do an under painting of translucent brown over the entire surface of the canvas.
Drew was a big help holding brushes for me. What would I do without him??
While the under paintings dry I'll get back to my pastel painting.
Posted by Dawn Secord at 3:07 PM 1 comment:

Drew and Monet help in the studio 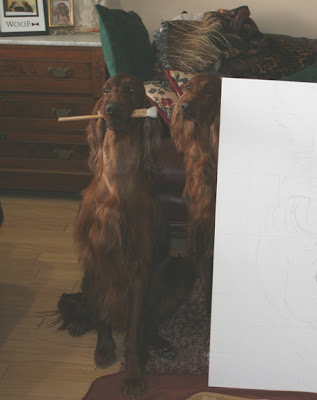 I'm just starting the sketch on a 3' x 3' close up of a tabby cat in oil. Our dogs are always in the studio with me and I have a big brush that I use to dust the eraser off the canvas with.

I put the brush in Drew's mouth and posed him next to the canvas. He spit the brush out a few times and then figured it was kinda fun to hold the brush. He decided the brush was his new toy and "I" couldn't have it. Monet had to see what all the fun was about and decided to get off the sofa and peek around the canvas.
Better get back to work and stop playing with the dogs!
Posted by Dawn Secord at 9:46 AM No comments:

Yesterday, Saturday 3/12/11, was Faith's second show and her first outside show. I totally expected her to be wild and playful since she is only 6 months old. To her, outside means playtime.
She was the only puppy at the show for the Irish Setter breed. There were three adult dogs and two adult females in addition to the Champion dog and Faith at the Irish Setter ring.
Faith was such a good girl. She stacked for the judge, didn't move a paw and resisted any temptation of running in the ring. She won her first point (our youngest dog to get a point to date!) and then went on to win over all the boys going Best of Winners and then to our surprise, Best of Breed. She is the youngest dog we've ever had to win Best of Breed, with competition, at such a young age.
We did take her in the group ring for two reasons. One, we felt it was respectful to the judge who gave her the win, and secondly, it was a great opportunity to practice in the ring for the pup. As a six month old pup we truly didn't expect her to win anything. She was as a real trooper in the group ring and didn't put one paw out of place (other than jumping on the other handlers if they only gave their dogs a treat! But she's six months old - what else could we expect with food involved!!)
Posted by Dawn Secord at 4:33 PM No comments: 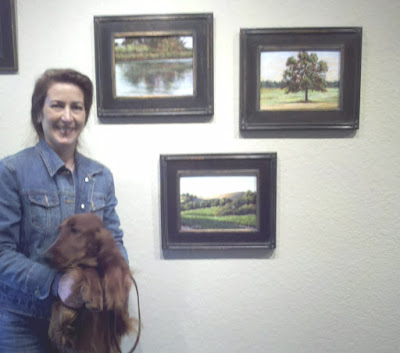 Three of my paintings are included in the landscape show at Pinnell Gallery. Rich and I took Faith with us to the gallery. She enjoyed meeting the gallery owner, Jennifer.
The show runs through April 2nd.
Posted by Dawn Secord at 1:52 PM No comments: