This is Sloan. I met Sloan's owner a number of years ago and we talked about painting her very special girl, Sloan. Sloan has had quite a show career which includes winning a number of Best in Shows, Best of Breed at Westminster 2011 and Best of Breed at the AKC/Eukanuba Championship 2011. Sloan is now retired and spending some time in the whelping box.

For the painting, a number of photos of Sloan were supplied to me. In the painting, she was to be reclining so a blend of photos was used. For the background of the painting, Sloan was to be resting on a family heirloom - a needlepoint antique love seat. Sloan's owners had some wonderful natural lighting that cast fabulous shadows on the love seat. To have the painting look even more antique"ish", I painted some heavy emerald green velvet draperies hanging behind the love seat. As a final touch, a bouquet of roses was placed next to the love seat. The roses were placed as a prop perfectly by Sloan's owner. They completed a triangular shape of color with Sloan in the center as a focal point. A good composition (or lack thereof) makes or breaks a painting.

The painting is quite large and measures 24" x 36". This painting was such a wonderful journey. Going through the photos of Sloan and the different furniture photos to find the perfect background was magical. Hope you enjoy viewing the painting as much as I enjoyed creating it. 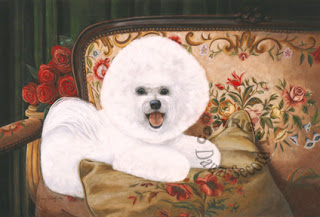 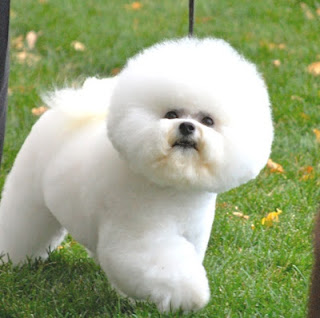 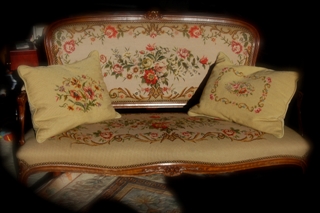 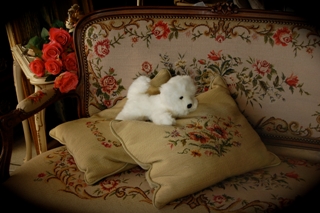 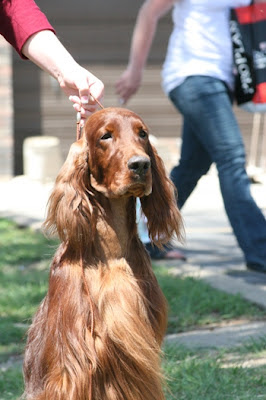 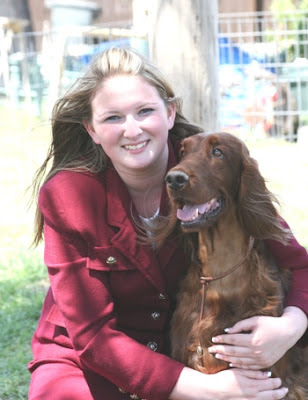 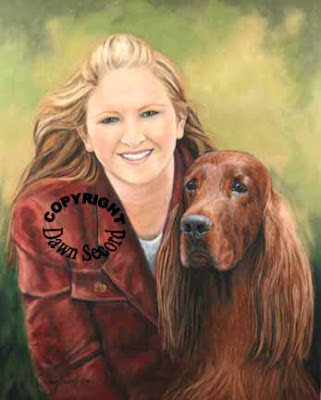 The portrait of Cassie and Star is finished. I'd taken pictures of them quite a while ago for the portrait.

In the photo of Cassie there are some lights and shadows on her face that were not included in her painting. While sometimes shadows can really enhance a painting, there are times they can take away from it. As an artist, I never "copy" a photograph. The photo is simply a reference tool to help create the painting.
In the photo of Star there were many changes from the photo that were necessary. Right away the direction of her pose was wrong. I wanted her looking into the painting and not out of it. So, in the painting, the direction of Star is with her facing left instead of facing right. In the photo Star was squinting. Using other reference photos to verify the shape of her eye when it was not squinting, I opened her eyes up in the painting. The leash had altered her neck line and created an extra fold of skin along her jaw line. In the painting I smoothed down that fold of skin and painted her neck hanging regularly. I used one of my dogs as a live model to see how the neck would hang without a leash pulling back on the folds of skin. I hope you like it!
If you'd like to commission me to paint you or your dog, please email me, call me or go to my website for more information.
Posted by Dawn Secord at 10:14 AM No comments: 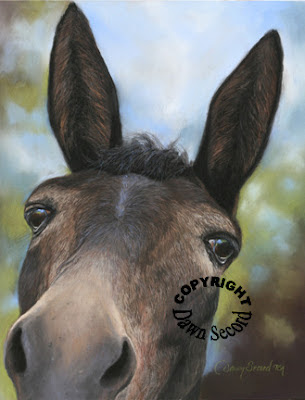 This pastel painting titled "Brown Mule" will be on display at the San Dimas Western Art Show at the end of the month. I've been working on creating pieces for the show since May 2011. Can't wait to see the work hanging. If you live in Southern California and would like to attend the show, here is the information:

Sam Dimas Western Art Exhibition
36th Annual Exhibition
"Spirit of the West"
April 27 thru 29, 2012
Civic Center Plaza
245 E Bonita Avenue
San Dimas, California
Free admittance and parking on the 28th and 29th
If you need more information please email me at fff@linkline.com
Posted by Dawn Secord at 10:04 AM No comments: