Finn - Painting of an Irish Setter

Here is a painting I've been working on since mid December.   I try to work on several  paintings simultaneously, going from painting to painting, to keep my eyes fresh.  It is a great way to proof what I am doing with each painting.   While working on this painting, I had three paintings in process; a Boxer, this Irish and a Springer Spaniel (that is very close to being completed).

﻿
A lovely lady named Christin had left a message on my phone about her dog, Finn, and wanted me to paint him.  It is so heartwarming to be contacted by someone who wants me to paint their dog.   I don't think it will ever be less exciting than it was for my first commission. 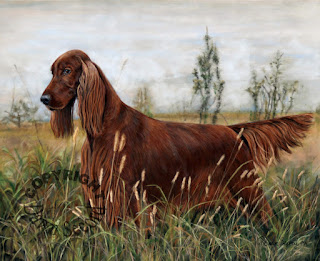 The initial discussion for this painting was great, the potential collector was excited, and I awaited the opportunity to meet her dog in Georgia.   We exchanged cell phone numbers and made plans to meet months later.   Zipping ahead to Georgia - I met Finn - he was GORGEOUS.   His photos were taken and we were all set for me to go through the photos when I returned to California.

Since Finn is also a hunting dog, Christin wanted to send me some hunting photos to be considered while going through all his reference photos.   She sent me the photos, and I have to say, they were really fabulous photos.   We went through the process of considering what touched her heart about the photos while I looked at each photo as an artist and compositionally.   In the end, we both loved this hunting photo and knew we'd found the perfect photo for his painting.

Upon asking, here is what Christin shared with me about Finn:

Finn is a sweet fun loving Irish setter.  While his human mommy took him home to be a loved member of the family with no intent of showing him, this gorgeous boy found his way into the show ring.  Showing only occasionally, he was still able to obtain his grand championship and finish out last year in the top 25.  But this sweet boy is not all show, his real love is being out in the field.   He's an avid hunter, even fancying himself a hound when his favorite quarry, birds, are not available seeking out rabbits, squirrels and even deer to chase.  Above all he loves spending time with his human pack joining in whatever activity they are involved in.

Thank you to Finn's family for having me paint him.  He is a really an awesome dog and painting him was my pleasure.﻿
Posted by Dawn Secord at 11:56 PM No comments:

A painting of Windsor is just finished


I met Windsor's parents last year when Norah approached me to paint their "boxer".  Of course I was thrilled - boxers have such expressive faces.  What I wasn't prepared for was to meet such a spectacular dog.   Not only was he gorgeous, he had a wonderful temperament.
We took a number of photos of him at that time, but Jonathan had a fabulous photo that he'd already taken of Windsor.  When he sent me the photo - there was no question - no doubt - that was the reference photo to use. 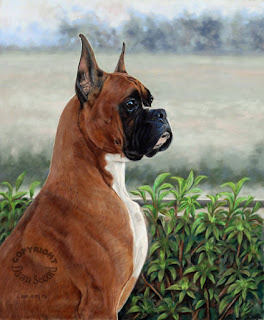 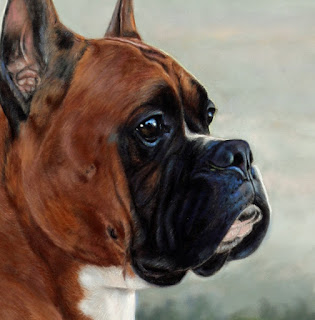 If you look at the reference photo at the bottom of this post you'll see I've made a number of changes.  I dropped the fence line so it would not give a break in the middle of his neck nor in the middle of the composition.  I've also softened the area behind Windsor's head to keep the focus on Windsor and not the background.

One big change in the painting was the amount of light and reflection I've added to his eyes that did not exist in the reference photo.   It is always great to have an exceptional photo as reference, but that is only reference - a road map to painting that dog.

As an artist, I have to know what to emphasize, what to eliminate, what to soften and what to strengthen.   Also, compositionally, I want the painting to keep the viewer in the painting and wanting to keep looking and enjoying.  Isn't that what we enjoy about going to a gallery - looking at the art and getting caught up in a painting?  I hope you enjoy viewing the painting as much as I did painting it.

I've asked the Bonwit's to share some information on Windsor:

Windsor is the fifth generation Top 20 Boxer in his pedigree that is charged with a long line of renowned Producers of Merit and Top 20 Boxers.  This magnificent boxer finished his Championship at 10 months of age and then went on to win 42 Best of Breed competitions plus multiple group placements during only ten months competing as a Special.
His sire, Platinum GCH R and G’s Mystical Dancer, aka "Danny” won the Top 20 in 2011.    And his grandsire, GCH Duba-Dae’s Who’s Your Daddy, aka “Bosco” won the Top 20 in 2009.
Other Top 20 Qualifiers in Windsor’s pedigree include CH Capri’s Woods End Spellcaster, aka “Loki”;  CH Woods End Crown Sable, aka “Tucker”;  CH Rosend’s Key Largo, aka “Bogie”;  CH Jems Jack of Diamonds, aka “Jackson”;  and CH Bayview Strides Ahead, aka, “Strider”.
Windsor is a very loving, playful, and inquisitive spirit who is now happily retired to Stud and living with his adoring family in Huntington Beach, California.
Owners:
Jonathan and Norah Bonwit
Brightwater Boxers
Huntington Beach, California
714-412-2222  JBonwit@earthlink.net
Posted by Dawn Secord at 2:56 PM No comments: