Portrait of Major for Emily


There is a very special story behind this painting.   At the 2014 National I was approached by this cute 15 year old junior handler, Emily, who was just learning to show dogs.  She didn't have her own Irish yet, but was showing dogs for others to learn the ropes.   She was so smitten with my artwork that she secretly commissioned me to paint her mother's dog as a gift.   Shortly after speaking with Emily, her mother approached me.   She wanted to commission me to paint Emily's first Irish setter once she had it.   Oh gee - what to do.   Funny thing is, this has happened to me before.  So, I knew what to do - I said  yes to both of them and would figure it out later. 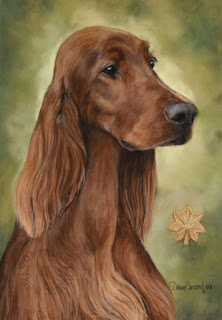 Eventually, I told Emily's mother what was going on and we all laughed about it.   Her mother wanted me to keep the secret from Emily and let Emily think she was commissioning me when in actuality, the painting would be for Emily.

Now it is 2015 and Emily has her first Irish Setter, his name is Major.   Emily is so in love with this pup.  I was able to meet him in Georgia and can easily see why she loves him so much.  This pup has such an amazing personality, he even let a 3 year old stack him  (Major is pictured below with his breeder's granddaughter).

I asked Emily to share her thoughts about Major and this is what she told me;

Major is a fun loving, happy dog who has never met a stranger. He is My Heart Dog. I have never loved a dog like I love him.  He, at a young age, went to a nursing home and did amazingly well for a puppy.  I plan on getting his CGC next year and hopefully he will be a Champion next year too. He is one of those dogs you meet and he leaves an impression on you.

Thank you to Emily and her mom, Tammie, for letting me be part of your family and create this painting for ya'll.   I look forward to watching Emily and Major in years to come.

And of all the coincidences, her pup Major is out of Harmony, who is a litter mate to Drew (our male and Bling's father).   So Bling and Major are cousins.   Just a crazy coincidence. 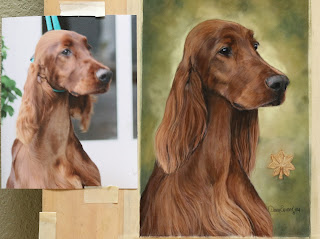 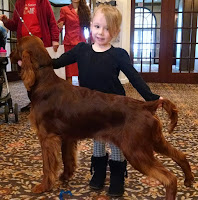