Irish Painting is a surprise 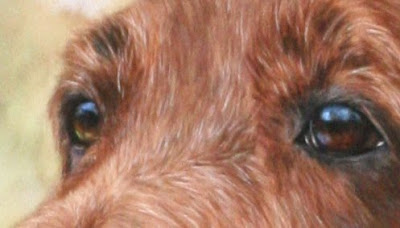 Just finished this painting. It is a gift and a surprise so I can't show the entire dog until the gift has been given.
Can't wait to hear what the recipients of the gift think of their present!
Posted by Dawn Secord at 9:43 PM No comments:

Drew in the Field 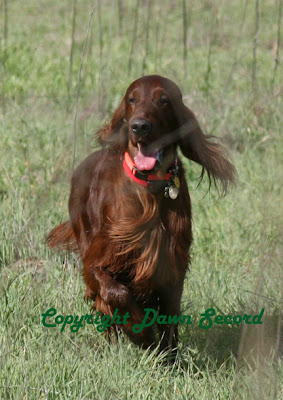 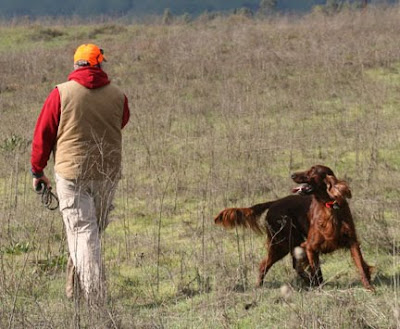 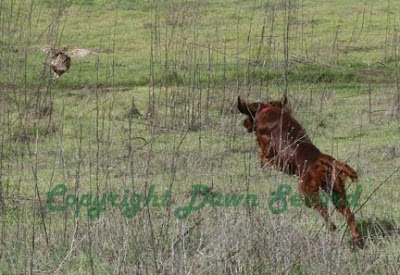 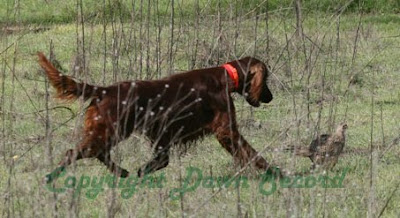 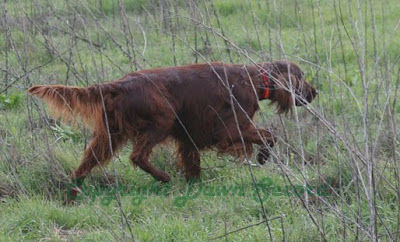 Rich wants to put a junior hunting title on Drew. Several weeks ago Rich took Drew to join some friends who were hunting locally. Everyone said Drew was a natural and had a blast.

Jumping three weeks later, everyone wanted to take Drew out again and let him actually find a bird. Of course, this was a great photo opportunity for me to take some additional reference material for future paintings.

We met up with our friends at 7 AM and it was the most beautiful day. The hunting fields are about ten minutes from our house. We've had a great deal of rain lately here in Southern California so the grass is very green. The skies were clear and gave us a beautiful view of some of the mountains.

Drew did find his bird. It was amazing to see how he found it and pointed it. This was my first time in the field and seeing a dog work naturally. Thank you to Dave and Cathy for taking us along and working with Drew!
Posted by Dawn Secord at 10:03 AM No comments: 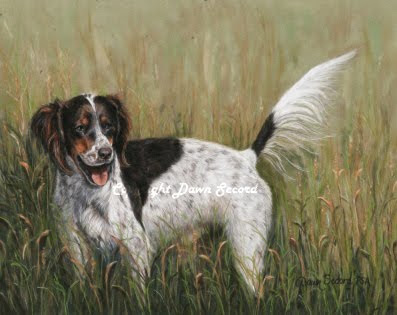 Trooper is an English Setter - specifically a Llewellin which is used for hunting. He is eight years old and in absolutely magnificent condition for a dog of his age.
The photos used for this painting had been taken in the field when Trooper was actually working. For additional reference material, Trooper was brought to my studio so I could meet him and take more photos.
He was a joy and full of personality. It was fun to see him working back and forth in our front yard looking for birds. We live very close to a training facility and I think he recognized the scent in the air and thought our yard another field to work (not that our front yard is that big but it wraps around a corner with a lot of hedges).
The photos I took helped me to see his markings. His hunting collars somewhat blocked my view of the markings at the top of his neck. The background was adjusted a bit to strengthen the composition. The actual photo didn't have any height variation in the foliage and we wanted some more pizazz to the background. Hope you enjoy viewing the painting as much as I did painting it!!
Posted by Dawn Secord at 9:37 PM No comments: 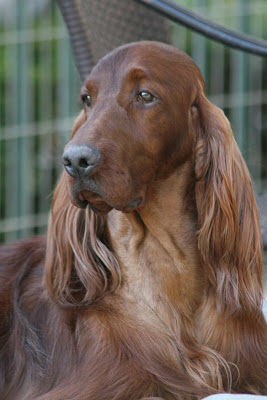 How do these years fly by!!
Drew is three years old today!
Happy Birthday our little man! All 80 pounds of him!
Posted by Dawn Secord at 10:23 AM No comments: 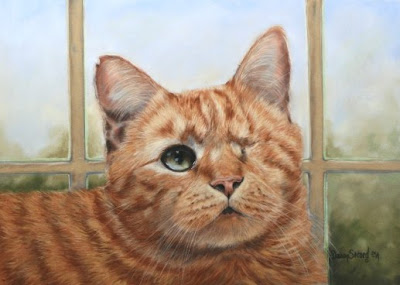 This is Wille. He has a heart warming story.
His human parents live in Southern California. While volunteering at a local shelter, they met Wille. Wille had been released by his former family. It seemed that he had a very sensitive stomach and was prone to urinary tract issues that could be life threatening.
Treating Wille's medical issues proved too much for his former family so this eight year old cat was given up. There is no explanation for the loss of his eye. Wille was at the shelter, an older cat, with medical issues and one eye. Definitely not an easy adoption candidate.
Well, Wille's new family fell in love with his personality and had to adopt him. Volunteering at the shelter gave them an opportunity to get to know Wille and they just couldn't stand him not having a family. He has the most adorable personality. It has taken some time to find the right food to balance his urinary tract issues, but this has been accomplished and Wille is flourishing. It was a pleasure to paint Wille's portrait and his human family are the most wonderful people. A story of true unconditional love.
Posted by Dawn Secord at 10:56 AM No comments: 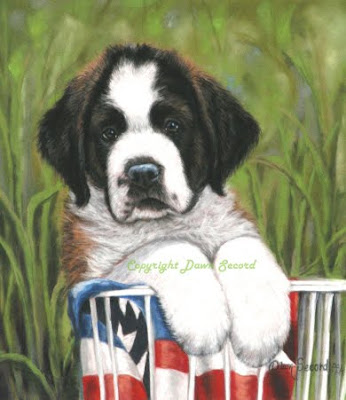 This is baby Remington. He was about 12 weeks old in this portrait.
There is a fun story on how I met Remy's human parents. Back in 2003 I was in a "Dog Reality Show" called "Top Dog" with my dog Jewel. The show air in February 2004 and was a FOX TV production. One of the other dogs on the show was a St. Bernard named Winston. His human parents were incredible people and we became friends during the course of taping the show. Once the show was completed, and they found out about my art, they commissioned me to paint Winston.
Sadly, Winston passed as age would dictate and it took the owners a while to be ready for a new pup. When the time was right, they brought a new pup into their home. This pup is Remington.
Remington is a big pup as any St. Bernard pup would be. He is beautiful and has a gentle quiet temperament just as Winston had. Knowing Remington would only be "small" for a tiny window of time they had me come down and take photos of him at that age. During the photo session they decided to put Remy in a basket on one of their bicycles. This was a fun idea - how long would a St. Bernard fit in a bicycle basket!!! Ultimately, that was the photo that would be used for his puppy painting.
It will be fun to watch Remington grow and I look forward to painting him as a Big Dog!!
Posted by Dawn Secord at 10:32 AM 1 comment: 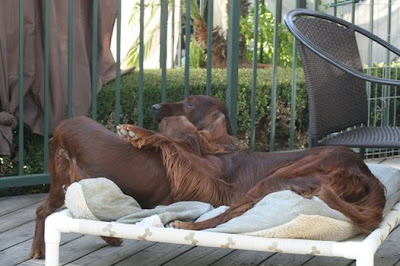 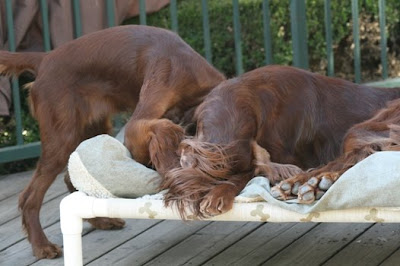 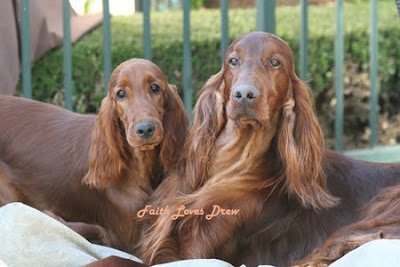 I was grooming our dogs this past Friday. It was a beautiful day. If you groom your own dogs at home you know how they can get frisky.
Monet was on the grooming table and my camera was near by. Up on the deck Drew had been laying in the sun. Then, the little pest, Faith, came by to inter up his sunning.
Glad I had the camera to capture their playtime. They are so cute together.
Posted by Dawn Secord at 9:57 AM No comments: