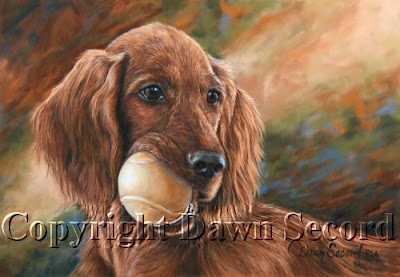 This painting was just completed to take to the Irish Setter National Specialty.
Several months ago a similar painting of the same Irish Setter was painted. That painting, "Wanna Play" was completed to be part of an exhibit I was featured in at the Pinnell Gallery called "The Art of the Dog". The painting sold at the opening of the show. The puppy in the painting is my dog, Monet, at four months of age.
"Wanna Play" was so well received by those at the opening of the exhibit I decided to do another similar painting - same puppy at probably the same sitting. This new painting is titled, "Wanna Play Too!"
It would be very interesting to hear which of the two paintings you favor. "Wanna Play" is on my blog under the month of April 2009 or on my website under the new painting page. To go directly to that page click this link: go see Wanna Play!.
Posted by Dawn Secord at 9:38 PM No comments: 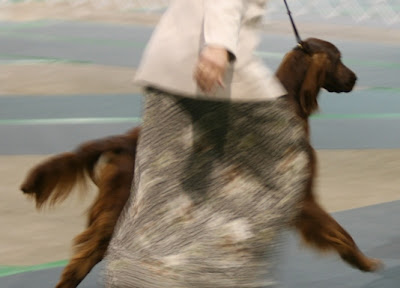 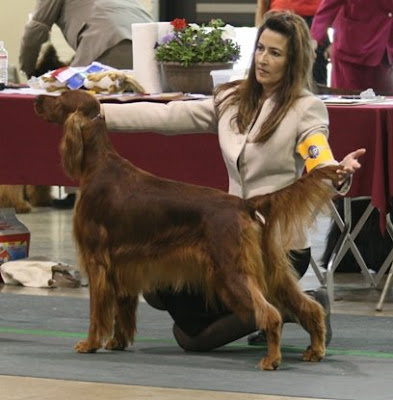 This weekend was the Mission Circuit dog show in Pomona California. This show has the reputation of being a "professional handler's show". We exclusively owner handle our dogs. The only time we had a handler was one time with Jewel at last year's National. So, we try to stay away from the shows deemed "professional handler shows". While we totally appreciate and support people using handlers and have many handlers as dear friends - we choose to show our own dogs.
The show venue is 15 minutes from our home. We have two young dogs and we thought lets enter them just for schooling purposes since the show is so close. We entered Drew on Friday and Saturday. Monet was entered on Sunday.
On Friday Drew went Winners Dog. Saturday he was dumped though he showed his little 15 month old heart out. On Sunday Monet went Winners Bitch. Hum - and we didn't want to show there because we were so certain we wouldn't do well. Goes to "show" - never say never. Thank you to the judges for finding our youngsters.
If you want to see more of my dog show photos please go to my website - and from the main gallery page scroll down to the bottom and click on Dog Show Photos or click on this hot link.
Posted by Dawn Secord at 10:14 AM 1 comment: 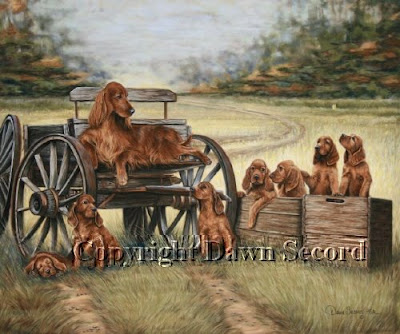 This is the first piece in my new series - the "Country" series. My goal is to come out with a new painting in this series once a year for the next three or four years.
Each year I come out with a new painting that is put into print to be released at the Irish Setter Club of America National Specialty. The painting always has some commonality with the show venue. This year the show is back east so the setting for the painting is the Amish area with a horse drawn antique wagon.
The puppies in the painting came from all over the Country. Some are from the West, one from the North and some from the good ole' South. The main dog in the painting had over 300 photos taken of her to find the exact pose that would make her look like she was laying on the wagon seat. People sent me wagon photos from all over the Country as well. The wooden boxes were derived from photographing a wooden box used by a friend's uncle who was in the Navy. The box was for his personal belongings in the late 1800's early 1900's. The painting was a year in the making. The name "Classic Country" defines what I wanted to achieve with the painting - a country theme with old time country equipment and puppies just playing in a field.
This original painting is sold. Prints are available on my website or by calling my studio at 866-393-7111.
If you are interested in commissioning a painting there is a page on my website concerning commissions. Calls are always welcome on my toll-free studio line. 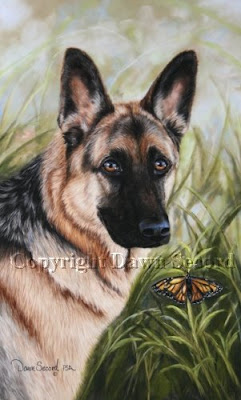 This is Parker and she was a German Shepherd Dog. Parker passed away three years ago. I understand Parker was a wonderful and loving dog. Her best friend was a pug named Pugsley.
When Parker's owners came to view her portrait at the gallery they had tears in their eyes. They expressed how surprised they were that I could capture so much detail from the photos they had. Many times people don't take photos of their pets with regularity. When they decided to have Parker's portrait painted they found they had very few photos of Parker and none that were what we were looking for as far as ideal photo reference material. Right before I started the painting they found a photo, long forgotten, that turned out to be the perfect reference. The photo was small and old - but valuable!
Monarch butterflies have great significance to Parker's owners so I put a Monarch in the painting at their request.
Sure wish I could have met Parker.
To see a larger image of her painting please go to my website at http://www.dawnsecord.com/.
Thanks for taking a peek at my work!
Posted by Dawn Secord at 5:51 PM 2 comments:

Magic is an Irish Setter I painted at the end of last year. His owners, Marilyn and Carolyn, called me from a dog show in Pennsylvania yesterday to let me know his advertisement in the publication, "Dog News", was out and they were receiving many compliments on his painting ringside.
Thank you to Marilyn and Carolyn for using my artwork as an advertisement for their wonderful dog.
To see a larger image of Magic's painting please go to my website at http://www.dawnsecord.com/
Posted by Dawn Secord at 10:15 AM No comments: 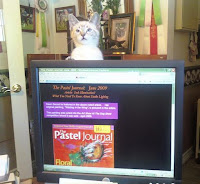 My 11 week old kitten, Baby Lacey, was supervising me putting new information on my website.

What a good little helper!

I was just interviewed for an article about studio lighting for the International publication, The Pastel Journal, June 2009. My studio has quite a bit of natural light in the mornings, but artificial lighting is needed in the afternoons. It was not until one of my studio lights broke and was replaced with an inferior light did I realize the quality of the Ott-Bulbs I was using. One of my paintings, Waiting in the Wing, is pictured in the article. This painting has been sold but there are prints available on my website. They may be purchased directly from the English Setter gallery.
To see the article in full please go to my web site and click on "In the News". The article information is locked there.
Have a great day!
Posted by Dawn Secord at 4:29 PM No comments: 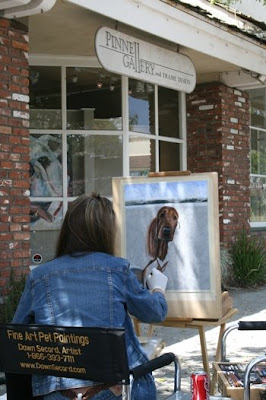 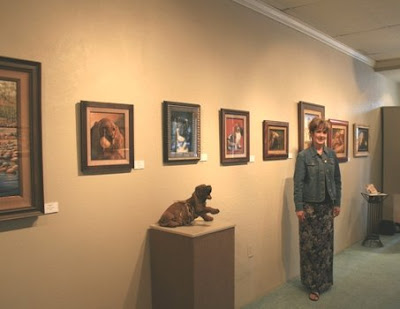 This weekend was the first weekend for the Art of the Dog Exhibit in Fallbrook, California. The opening was Friday night. There was wine, cheese and a full gallery of patrons - all very fun and exciting. On Sunday I painted outside in natural light for demonstration purposes.
Thank you to everyone who came by to say Hi. It was a beautiful day to paint outside.
The show closes on May 20th. If you are in the Fallbrook, California area - stop by the Pinnell Gallery to see the collection of my work on exhibit.
Have a great day!
Posted by Dawn Secord at 6:24 PM No comments: