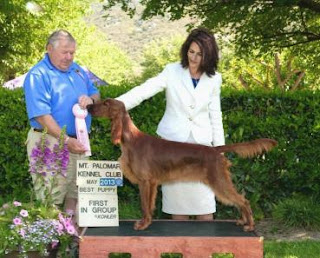 "Bling" Rendition Treasure Every Minute is such a pistol.   It has been fun watching her grow.  It is difficult to conceive that she is seven months old now.   The saying, "Time flies by" is so appropriate.

Watching her transition from a newborn into a juvenile (delinquent at times) is bittersweet.   I fear tomorrow will suddenly show her with a white face and the stiffer gait that our older dogs develop.    Tomorrow is years away, but is it not amazing how quickly it comes.

Rich and I love this pup and will treasure every minute with her.
Posted by Dawn Secord at 12:05 PM No comments:

This is a very special painting.   There is just something that really tugs at my heart when I see an Irish Setter in motion.

Agility is such a challenging sport.   It is wonderful to watch as the dog and owner work as a team.   When the Irish Setters run, I can't take my eyes off them.   The beautiful red coat is waving back and forth almost like a flag waving in the breeze.   Following the agility course and the training takes extensive time and team work.

This painting features Nikki.   Nikki is not only an agility dog, but a conformation champion as well.   She won the Veteran Class at the 2011 Irish Setter Club of America and an Award of Merit.    The only time Nikki showed less than a charge ahead attitude was when her owner entered her in an obedience class.  From what her owner told me, sounds like that was just too boring for such an animated girl!!   She did what was asked of her.  However, she let those around her know it was not her cup of tea!  :)

In the primary reference photo for this painting, there were a lot of dark objects that could have stolen the emphasis off Nikki.   So, I made everything pretty light in value so that the only dark in the painting was that of the dog.   The painting is a balance of light and dark - striving to make the eye rest directly on Nikki's face.    She is a beautiful dog and has captivating eyes - so full of life.

The painting was an absolute joy to do and I thank her owner for choosing such a wonderful pose for Nikki's portrait.   Nikki certainly has a zest for life and her eyes tell the entire story. 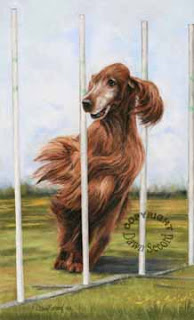