A painting of 4 boys


This painting had been in process for a while.  With four dogs in the piece, there was a great deal of thought and discussion about the composition.

The bottom two dogs, Reilly and Rusty, had passed.  Therefore, reference material was limited.   Thankfully, their owners had some lovely snap shots from years passed.

The top two dogs, Grady and Patrick, are with us and we had plenty of opportunity to get reference material.  Grady - top left - is much grayer in the face than depicted.  For the painting, his owners wanted less gray shown in the painting.  Then there is Patrick - upper right.   He was not as interested in having his photo take as was Grady.   It took a little more work to get a photo everyone was happy with.   My goal was a reference photo that would compliment the blend of poses into our composition of the 4 dogs.   Most importantly, his owners wanted a reference photo that showed his true expression.   It took a while to get "that" photo of Patrick.  In the end - we were all pleased.  I had a wonderful photo for the painting and they had a photo that was truly their boy.

I've asked them to share a little bit about their boys.  Below is the story of Grady, Patrick, Reilly and Rusty! 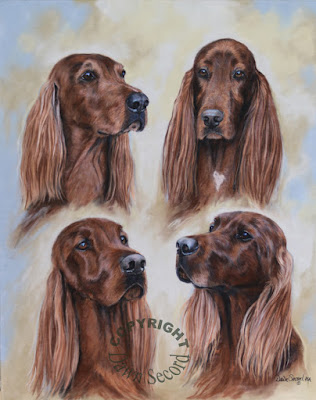 Reilly came to us after we had lost our first Irish Setter.  He was a joy to have from the very first day.  He loved everyone especially his Kitty friend Noel. they were inseparable. Reilly enjoyed  Agility Rally Obedience ,Hunting,  but he excelled as a  therapy dog.  Hr worked with oncology patients  and  the memory impaired  . It was amazing to watch him interact with these people they all loved him.  Another of my very favorite activities that we did was to work at the local library doing the R.E.A.D. program  The children loved to read stories to him , had birthday parties and wrote books about him. He even had his own Mail Box were the children would write letters to him Reilly was very special to me.

Our breeder of Reilly decided he needed a friend , Rusty came to us from the rescue of Vermont.  they were just about the same age.  Rusty immediately  took to Reilly  they would sleep and play together.  It was like they had known each other forever. Rusty never like obedience, agility, he just wanted to be close to you all the time.  Rusty joined Reilly also becoming a Therapy and R.E.A.D. dog.  He was very gentle and would put his head in the persons lap to be petted.  Rusty became know as "BIG RED" by all his friends.

We had tragically lost Reilly and felt Rusty needed a companion  Grady came to live with us.  Again Rusty accepted this puppy like his own.  Grady was a very fast learner. If you showed him something once he would never forget it.  He has been working on his Ch title,  Just recently got his beginner novice title with a first place finish in a all breed trial.   Also at the same time got his Novice Rally title with a 2nd place at at last years Nationals in RI.

And then there is PATRICK, he is the youngest.now.  Patrick on his first day as at our home caught a baby bird.  There is not a day that goes by when he does not gets into trouble.  One minute is very lovable and then that devilish personality   He is also showing and just needs his Majors. He is very mischievous, has chewed several pair of glasses, hides my shoes, ate my watch .  Always thinking of what he can do next. He loves to just be by my side

They all have different personalities  I love them all

Thank you for the very special picture of my "BOYS" 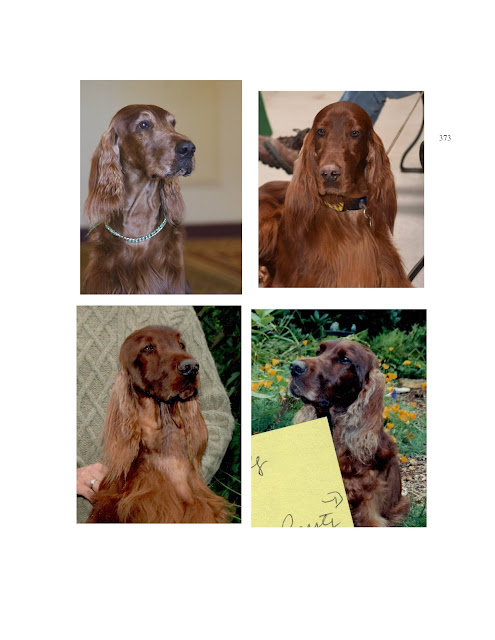 I've never met Ethan, he lives in Australia.   The good news is, I've met Ethan's number one fan.   Not sure he would call himself Ethan's dad.  Though, my husband is the "dad" to our dogs.   So, I'm going to call Ethan's human, his dad. 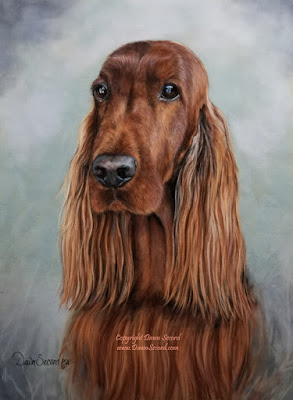 Last year, I met up with Ethan's dad at a show (we'd known each other for a while).   I was working on a commission there at the grounds.    Ethan's dad is a real hoot - a character - a man oooozing with personality.   Not sure exactly how it happened, but Ethan's dad ended up at my easel feigning to be working on my painting in progress.   The antics were captured in this photo and then promptly forwarded on to the owner of said painting - who lives in New Zealand.  Would she be in fear of what Ethan's dad was doing to her painting?   We all had a great laugh. 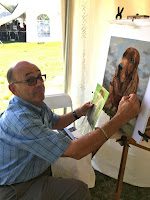 So, while on these fun "goings ons" were happening, Ethan's dad showed me this picture of Ethan that was on his cell phone (dad's phone, not Ethan's).   Would that photo be usable as reference material for a painting.  Of course it would!! 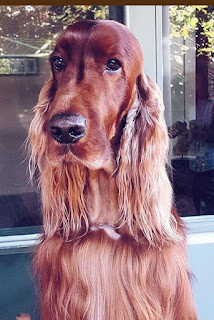 In the photo, Ethan's eyes totally captivated me.  I couldn't wait to paint them!  He just melted my heart.

This painting was finished last month and it will be headed to Australia in the near future.   A huge thank you to Ethan's dad for trusting me to paint his special boy.
Posted by Dawn Secord at 2:42 PM No comments: