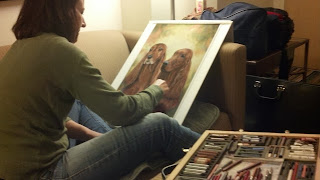 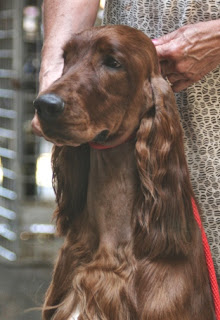 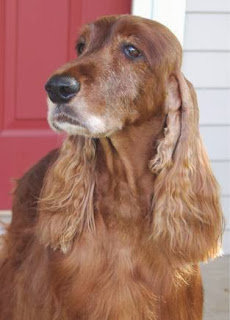 This is a portrait of Miah and her pup, Gates. I've known Gates since he was 12 weeks old. It is hard to believe he is all grown up, a finished champion and now a Best in Specialty Show winner. His dam, Miah, is stunning with the softest eyes. Their owners had commissioned a portrait of the two of them 2012. We knew we would all be at the same show and planned accordingly. Gates was with them at the show and we had several opportunities to take photos of him for the painting. They had supplied me with photos of Miah to use as reference material for a non commissioned painting the year prior. The goal was to have the painting almost finished and then work on it at the 2013 Irish Setter Club of America National Specialty. The finished painting could then go home with them. Murphy (as in "Murphy's Law") decided to rain (literally) on our parade...I mean dog show. The weather at the show was lovely at times and not so lovely at other times. Long story short, the painting was finished in the hotel room rather than in my booth as a public demonstration. You know what they say about the best laid plans. The good news was - as my husband and I were driving home to California from Virginia, the portrait was on it's way to Michigan. Thank you to Ken and Debbie for commissioning me to paint your beautiful babies!
Posted by Dawn Secord at 9:14 PM No comments: