Willy and the Truck

This is a painting recently finished.  It was a gift so I had to be very quiet when contacting Amy.   We didn't want her boyfriend, Nick, to find out what she was doing for his birthday.

Amy wanted to have their dog, Willy, in the cab of Nick's truck.  Amy sent me a number of photos of Willy and a number of photos of his truck.   The goal was to have Willy seated in the truck.   It didn't work out for Amy to take photos of Willy actually seated in the truck - sometime surprises are difficult to pull off.  So, I needed to combine a few photos.     Amy shared some back ground information on Nick, Willy and the truck.   Here is their story!...... 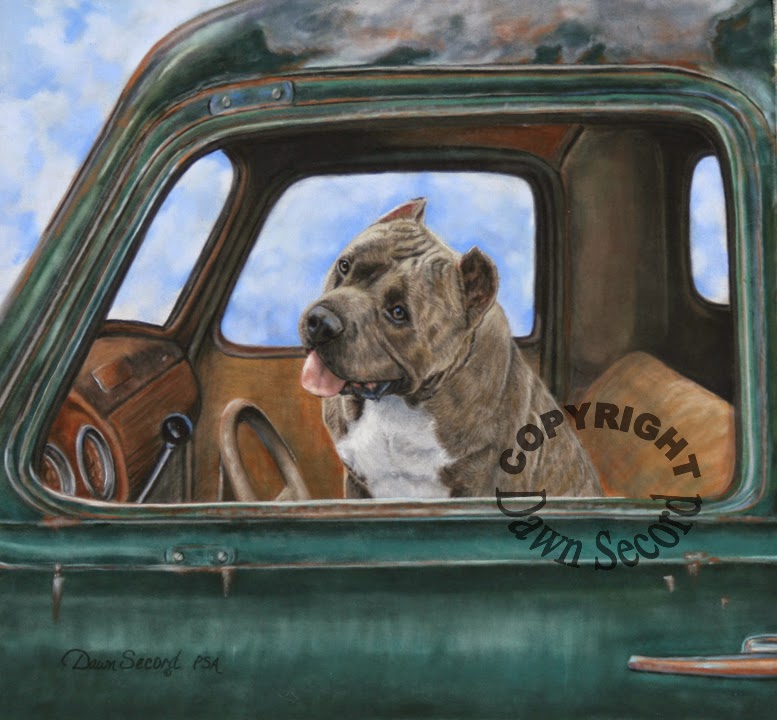 This little jalopy… I mean, gem is a 1950 Chevy truck.  It is unique in several ways; it has a 1990 Chevy S10 frame underneath, it sits on airbags and it also has an 8 cylinder Chevy engine in it.  People are quite surprised when it screams by them on the highway or when they see it going up or down on it’s airbags!


Nick paints and restores classic cars for a living and sometimes people are surprised that he wants to keep the truck in it’s patina exterior.  I can’t tell you how many times he has been asked, “So, are you going to paint it?” We love it the way it is and another little dent or rust mark only adds to it’s character!  Plus, we can drive it on the back country roads without worrying about every little pebble or rock hitting it.  Now, the next car will be a different story, that will be the “Sunday car”.


As for Willy, he is a 3 year old American Bully, a newer breed recognized by the UKC and of course, the ABKC.  He is owned by Nick and Amy, who have owned English Bulldogs together for the last 12 years but decided to venture into another breed with Willy.  He is, indeed, a different kind of dog.  He is more energetic than a bulldog and more needy, if that is possible.  He has such facial expressions and body movements, especially when he’s happy or excited about a new toy, that it makes us laugh to ourselves and with each other at times.  He is such a character, quite possibly our favorite dog of the 4 that we’ve owned so far, just don’t let the others know that.  With his handsomely cropped ears and long tail, we’ve always said that he looks like a big cat and therefore, he has always had the nickname of Willy Cat and actually is mostly just called Cat.  He loves toys of all kind but mostly his big, black Kong, sleeping in the bed (usually taking up ¾ of his mother’s (Amy’s) pillow!), eating grape tomatoes off of the vine and howling with his dad (Nick).


After 12 and a half years together, we don’t really “do” surprise gifts anymore.  If one of us wants something, we usually discuss it and purchase it together.  However, I wanted to be creative and surprise my “manfriend” for his 31st birthday.  And 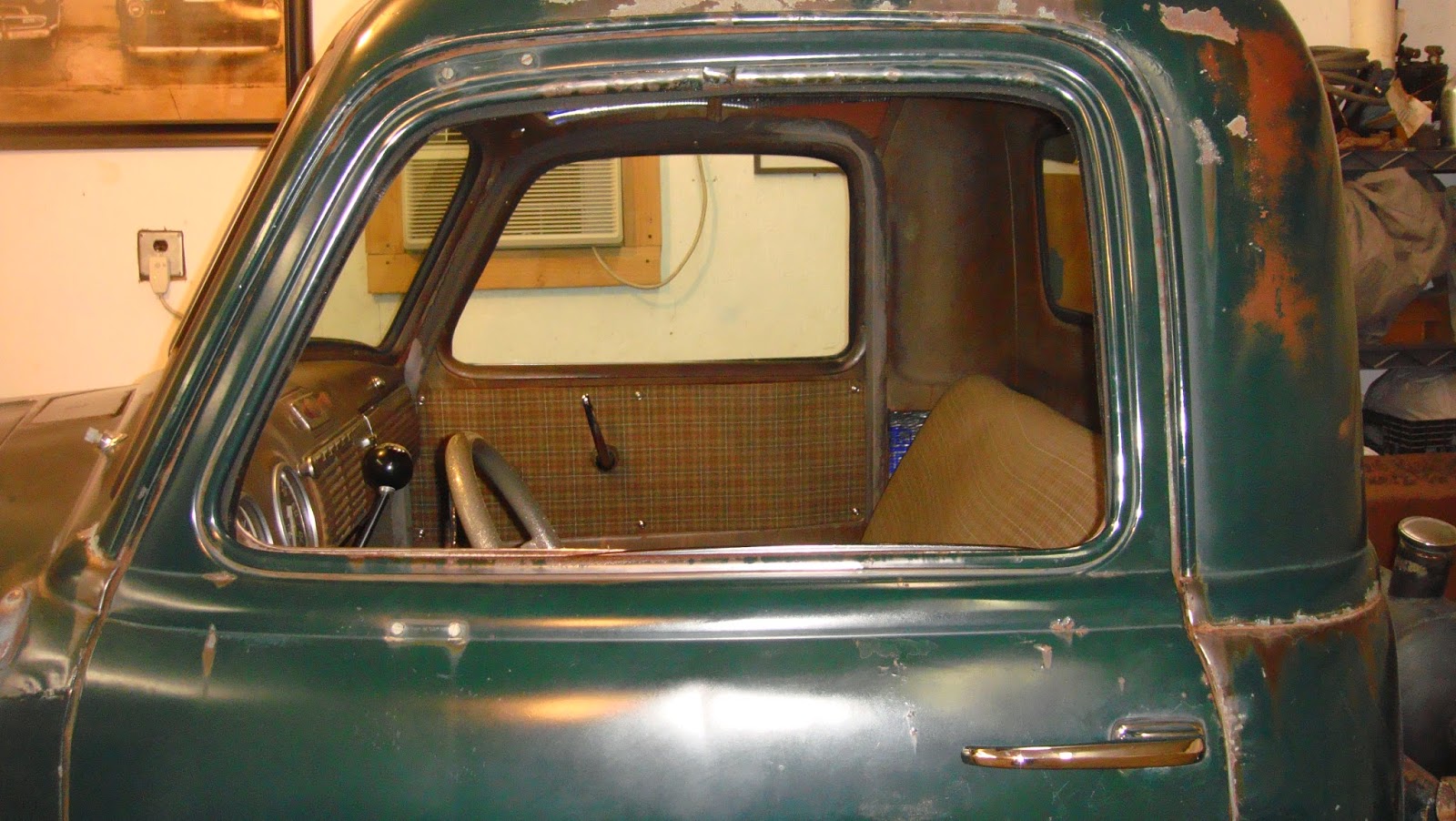 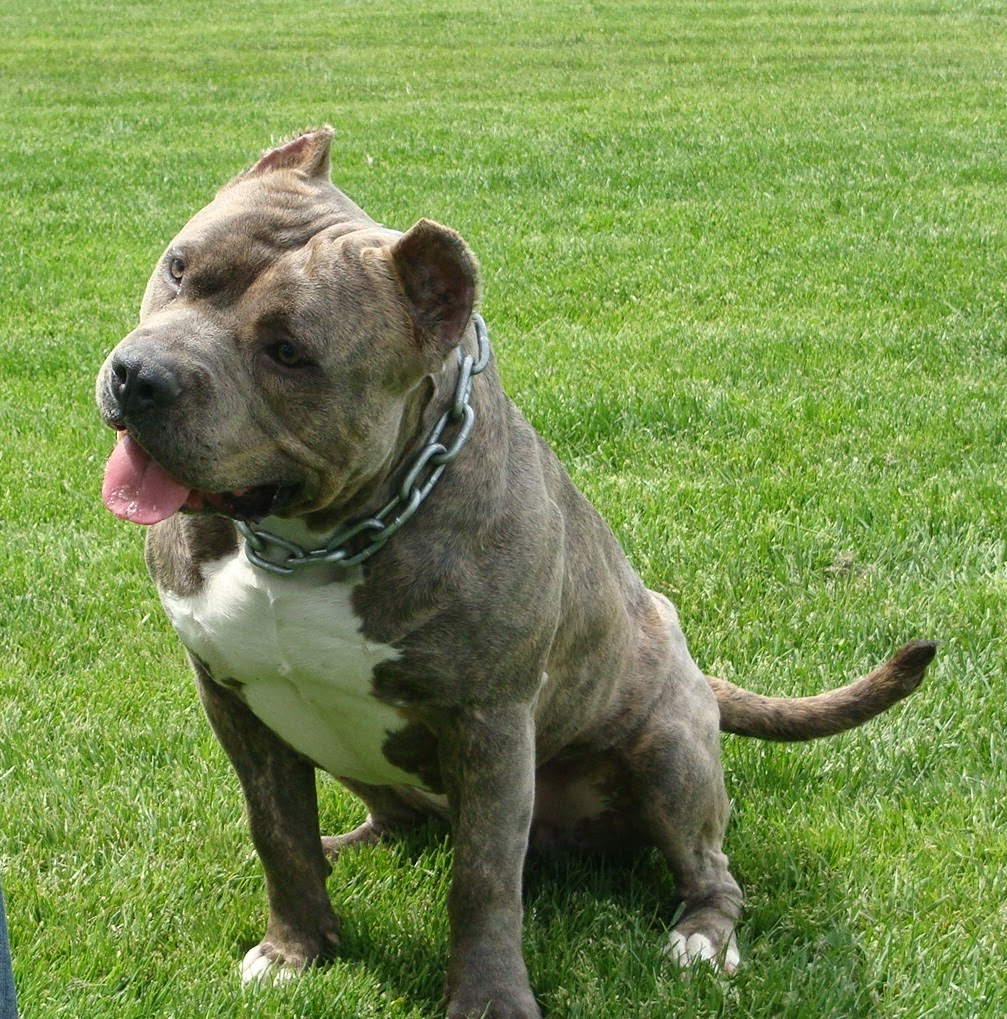 what better way to celebrate and surprise him than by incorporating two of his favorite things in an awesome painting, his 1950 Chevy truck and Willy.  I think he will be very surprised AND happy with his gift.

Thank you Amy for asking me to create this painting for ya'll.  It was so much fun to be part of the surprise!!   Hope you love it Nick!   Please give handsome Willy a treat from me!
Posted by Dawn Secord at 11:05 PM No comments:

Went to the dog show yesterday and Bling picked up another point.   She is so much fun to show.  Haven't practiced her at all and she went in the ring like a little pro.

Is it illegal to have this much fun with a dog???? 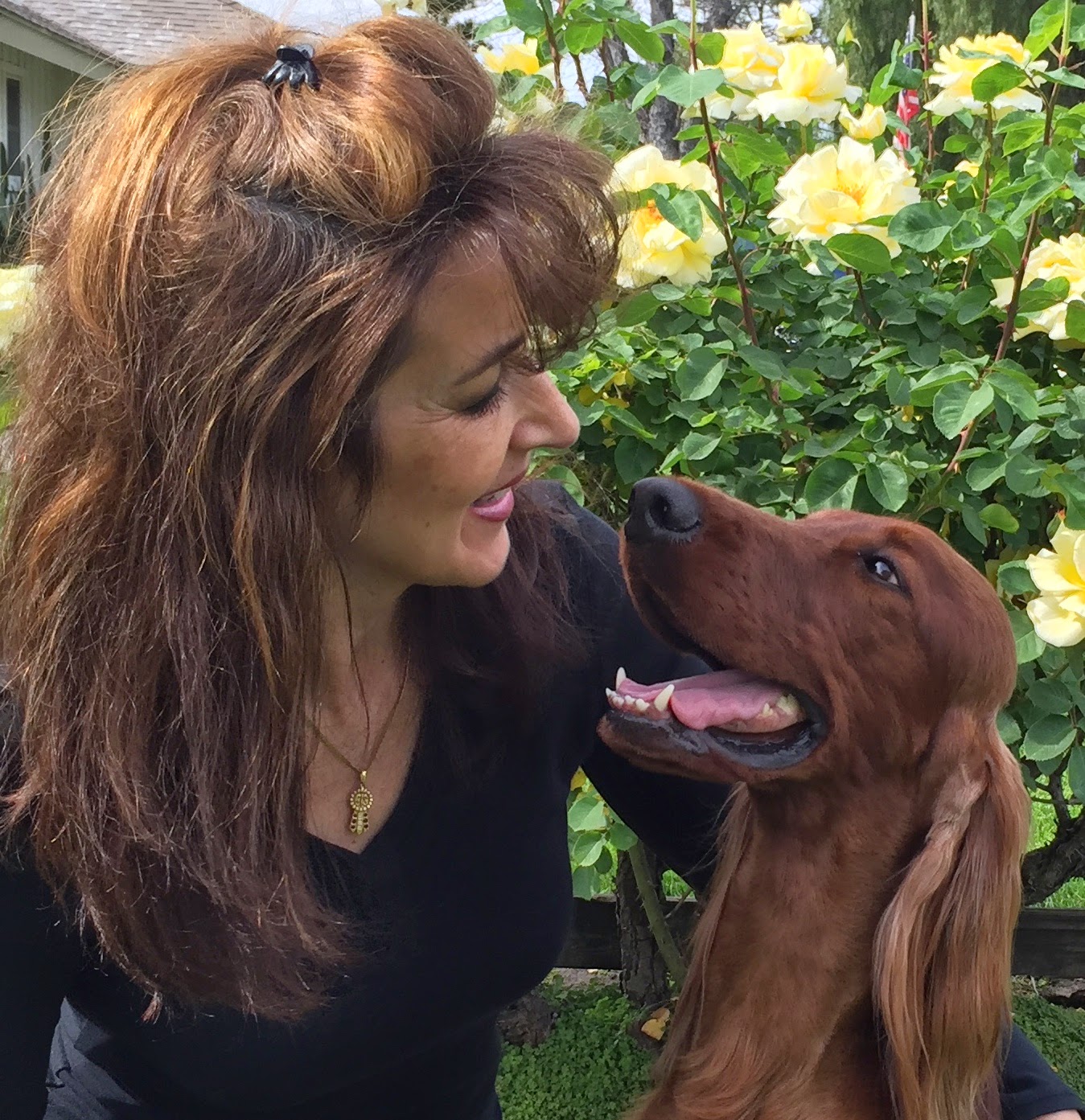 Posted by Dawn Secord at 9:45 AM No comments:

This is Bebe.  She is an English Setter.   I've always loved English Setters.  As a young girl, I just thought the setters were like Siamese cats and came in different colors.  At that time, I wanted a setter in every color.   It is fun to look back at how we viewed life as children.   Embarrassingly I must admit, I also thought a Flat Coated Retriever was a black Irish setter.

When Bebe's owner contacted me to paint Bebe I was thrilled.  The painting was to be a gift for her husband.   So....we could have no Internet contact, no Facebook contact - we were in a stealth mode because Jennifer's husband could figure just about everything out.   She paid me with cashier's checks.....all stealth.   It is interesting how she handled my waiting list time frame.  Jennifer told her husband that the gift was on back order - ingenious!  Seems like nowadays, everything is on back order.Now, one has to ask, who is the more clever of the two??  This was the first time Jennifer was able to fully surprise Norman!! A win win for both of them. 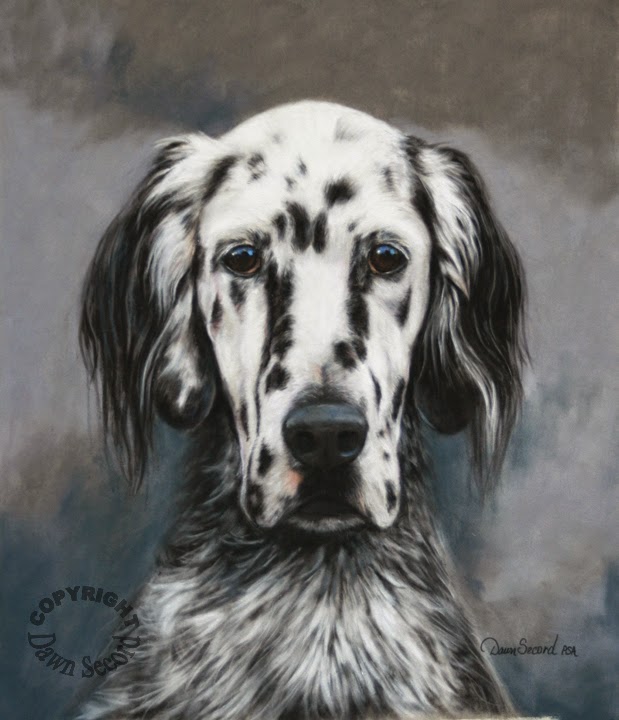 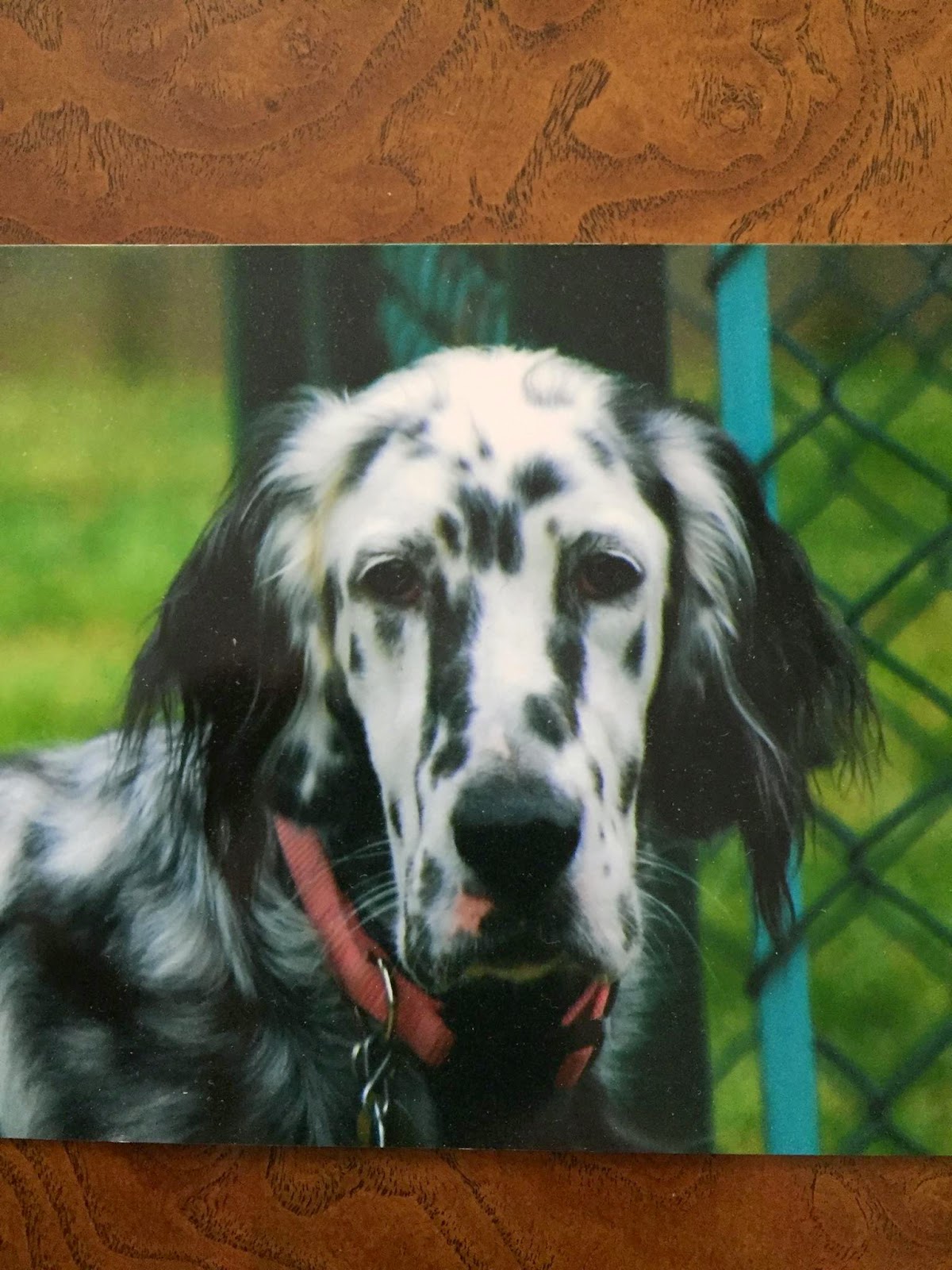 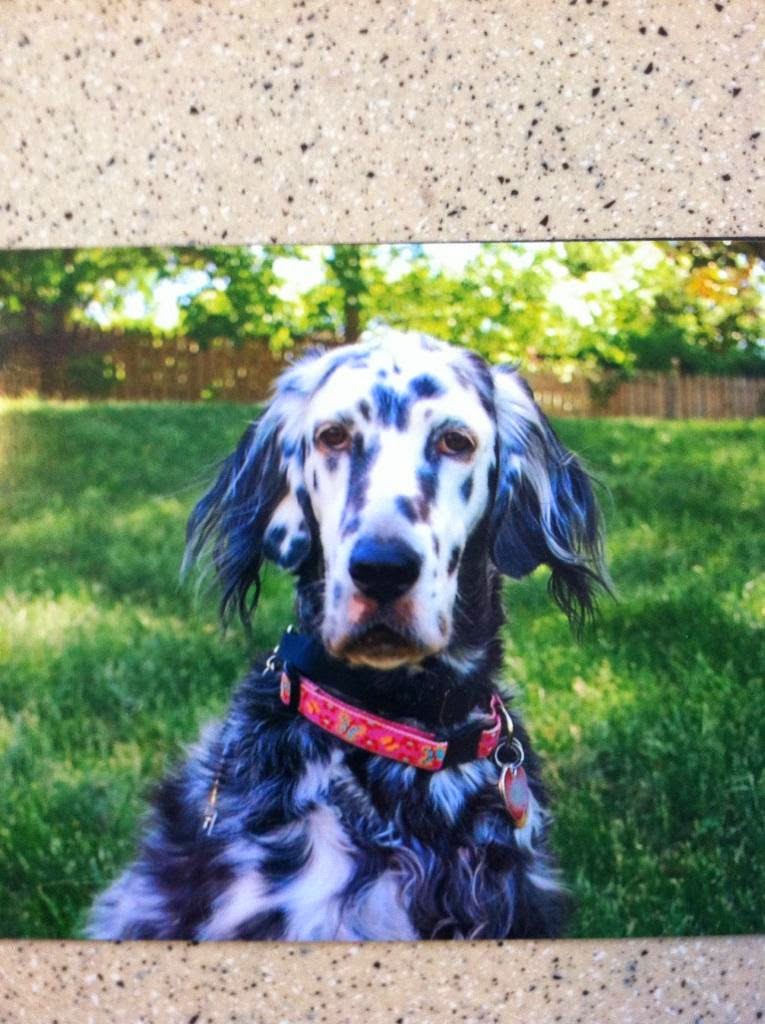 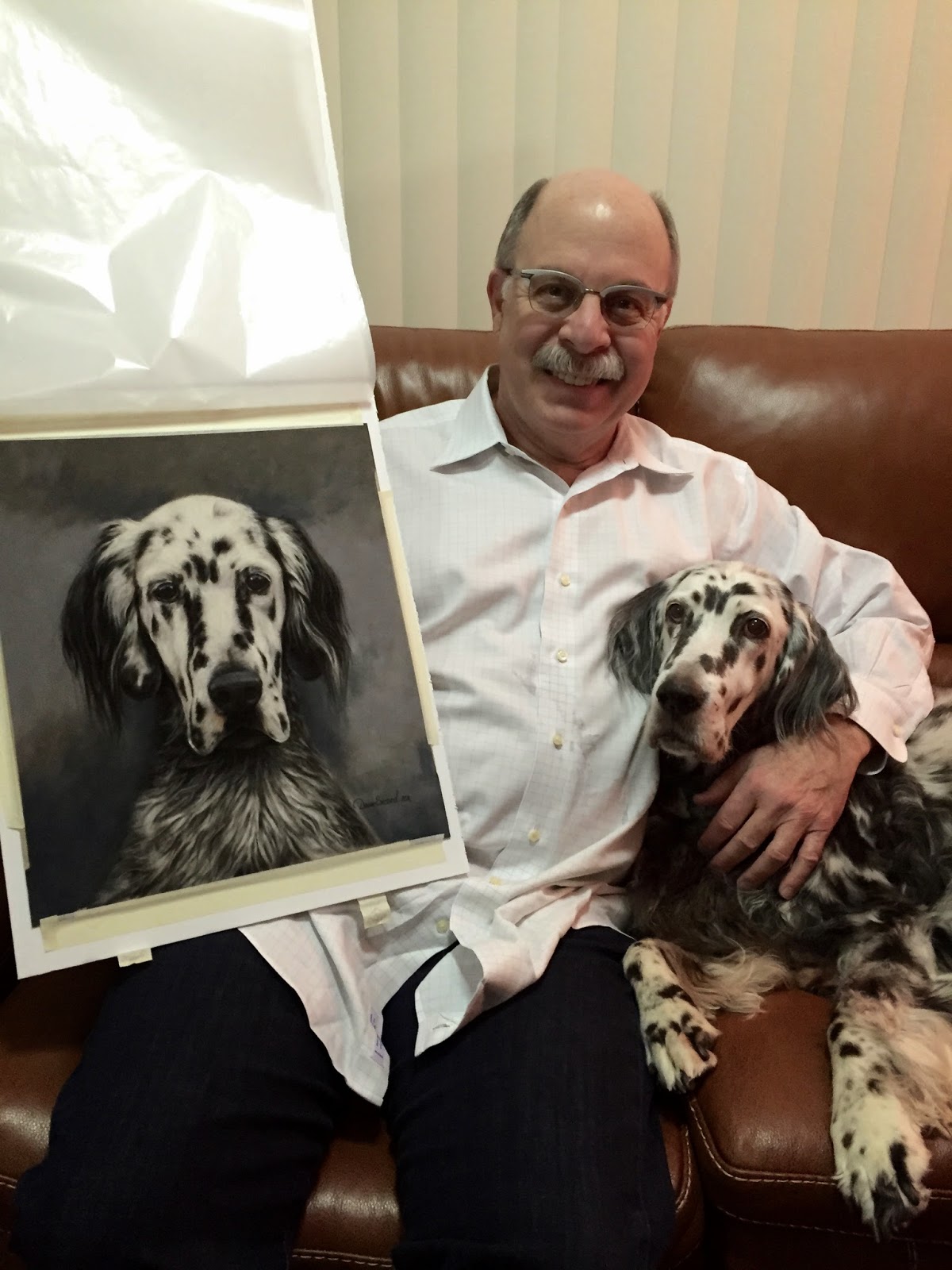 To my delight, Jennifer's husband, Norman, called me in person to talk about his gift once it was received.   What a great guy.   He talked about how special dogs were to his family and how the painting brought forth some tears.   Seems like the true gift recipient in this painting was me.   I never expected to meet all the fine people I have through my paintings.

I'd asked Jennifer and Norman to share a little bit about Bebe and this is what they told me:


Bebe is a wonderful 8 year old English Setter.  After a lifetime of dog ownership, she has become my husband's all time favorite. We got Bebe when she was a year old from a breeder. She was shy and immediately took to my husband as her protector. A few weeks after asking Dawn if I could get on her waiting list to do a portrait, within 48 hours, Bebe became totally blind due to SARDS (Sudden Acquired Retinal Degeneration Syndrome). It has been a difficult adjustment, but Bebe is doing very well. She is totally spoiled and has trained my husband to make her toast for breakfast every morning! Dawn has truly captured her essence and beauty.

Thank you Jennifer (and Norman) for the honor of painting your special girl!
Posted by Dawn Secord at 1:26 PM No comments: