Under Sun Stars and Sails by Marsha Hall Brown, Illustrated by Dawn Secord

This project has been a few years in the making.   It was great to work with Marsha again.  I was thrilled when she asked me to illustrate this historical book published by Spinner Publications of New Bedford, MA. 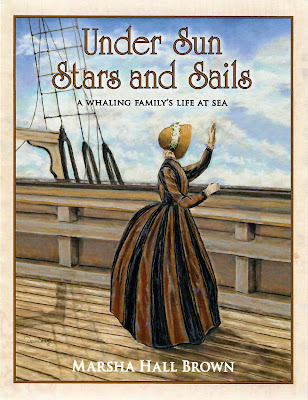 The book follows a whaling family's real life experiences at sea between 1851 and 1861.   Marsha Hall Brown is a descendant of the family as well as the island of Nantucket's founding families.  Marsha had some of the artifacts I painted and sketched in her possession at the time of the illustration process (most of which have now been placed with the Nantucket Historical Association).

It seemed at times that I was on the journey with the family.  It would have been fascinating to been at sea with them.   One can only image the adventures of young Helen (Nelly) as she traveled the globe.
There are some historical illustrations included in the book which are wonderful.    It amazes me that illustrations, such as the historical ones included in the book, could survive not only the decades but the elements.

The current illustrations, including the maps and cover, were done by me.  Countless months were spent researching maps circa 1851- 1861 for the map illustrations.    Panama in 1852, for example, is not what we know today.  The routes to travel from one coast to the other were crude at best.   Many maps were studied before I created the illustration for that area.  It was critical that the map illustrations created were accurate for the time period.   Each illustration was created with a detailed sketch and discussed with Mrs. Brown before rendering a final illustration for publication.  I studied whaling vessels for illustrations.   Fortunately, Marsha was a wealth of information.   She is an expert on the inside and outside of a whaling vessel.  I studied the royal dressing trends for the illustration of the Queen of Tahiti as well as foliage and landscape for accuracy.   For the young Nelly, I researched clothing for a child during that time period.   The cover illustration was absolutely my favorite.  The gown Mrs. Marshall wore for the vessel's true return to port was made especially for the occasion.    The gown is still intact and part of the collection donated by Marsha Hall Brown to the Nantucket Historical Association.  I was able to use several actual photos of the gown to create the illustration for the book's cover.   The horse hair chair used in the Captain's quarters illustration is still in possession of Mrs. Brown's family.  Researching antique furniture and items was of great interest as my own grandmother was an avid antique collector.  There are many fond memories of accompanying her to estate sales and witnessing the auction process.  Her basement smelled of turpentine and wood stain. 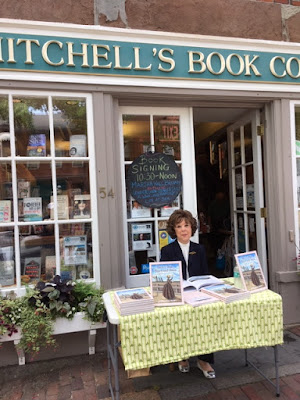 The above photo is of Marsha during a book signing in Nantucket at Mitchell's Book Store.  Having personally visited that book store a few years ago, it is my favorite photo of Mrs. Brown's book signing tour.

A deep and heart felt thank you and expression of honor to Marsha Hall Brown for including me in such a wonderful project.
Posted by Dawn Secord at 5:10 PM